As you know, Phil Robertson the patriarch of Duck Dynasty created a stir with his quote in Gentlemen’s Quarterly. Actually, it’s the fact that his statement about homosexuals and homosexuality were taken wholly out of context by the media that created the storm. You’ll be shocked to know that they’ve made no effort to correct the problem THEY created.

Now they they’re faced with a HUGE backlash, A&E is now feeding the same major media with stories that are designed to further tarnish Phil and the Dynasty family.

‘Duck Dynasty’: A&E warned Phil Robertson about speaking out too much

In the best Barack Obama fashion, A&E is pointing a finger and screaming at Phil. While they weren’t caught completely by surprise by Phil’s position on homosexuality they were absolutely caught off guard because they thought their contract had him under their thumb. They’ve been wronged, they’re the victim here.

The scandal has turned into the kind of tempest network executives feared all along. A&E knew of Robertson’s controversial views – expounded in videotaped sermons and elsewhere – before the show premiered in spring 2012, and warned him not to overshare on hot-button topics such as gay rights and race relations, according to a producer familiar with the situation.

In a statement earlier this week, A&E said it was “extremely disappointed” to read the GQ interview.

The Times report goes on at length in the best of Progressive blah, blah, blah. What the story avoids is the truth.

Your Curmudgeon found the truth that the intrepid, professional reporters and their editors at the LA Times couldn’t seem to turn up.

Well, well, well, what do you know… it turns out the network had a publicist in the room with Phil Robertson when he gave much of his fateful interview to GQ magazine. And yet, no attempt at damage control was made, either during or after the interview.That’s a bit curious, isn’t it? The network didn’t do diddly-squat to stand up for the star of its top show. His comments have been widely distorted and misquoted, but A&E hasn’t lifted a finger to make it clear precisely what he said…

Here’s the actual context of Phil’s interview with GQ that nobody in the major media – or A&E – is bothering to report.

The general outline of any devout Christian’s answer to questions about the morality of homosexuality is not difficult to anticipate. Robertson didn’t use particularly aggressive language. He encouraged no hatred or animosity. On the contrary, in one of the suspiciously less well-known passages of the interview, he talks about the Christian duty to love the sinful:

“We’re Bible-thumpers who just happened to end up on television,” he tells me. “You put in your article that the Robertson family really believes strongly that if the human race loved each other and they loved God, we would just be better off. We ought to just be repentant, turn to God, and let’s get on with it, and everything will turn around.” 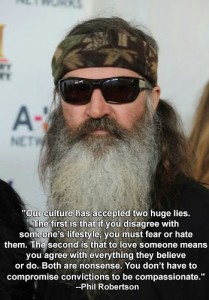 You can read the whole GQ story HERE. You’ll find not one word of hate or fear unless you’re willing – as are A&E, GLAAD, and the rest of the victim’s lobbies – to manufacture it.

The Curmudgeon doesn’t do conspiracies, they never stand the test of facts. We don’t consider the goings on with A&E and the Ducks to be a “conspiracy”, honestly we’re not sure what to make of it.

Other that the fact that A&E and the major media are peddling lies. Of course that’s their normal day’s work so we have a problem blaming them for just doing what they do.

We’re also very sure that the Ducks will make out just fine. So far only Cracker Barrel has dropped them from their merchandising at their restaurants, but that lasted less than a day and the Ducks are back with bells on. There are at least two cable channels that want them and there will certainly be more.

The Curmudgeon Channel will make a place for them in our lineup. Of course, we’ll have to start a channel but if the Ducks want to sign with us.