This week’s Weekend Caption Contest™ proved popular. Hey, what else can you do if you are stuck at home with no sports and you don’t want to risk any more kids? The assignment this week was to caption the following picture: 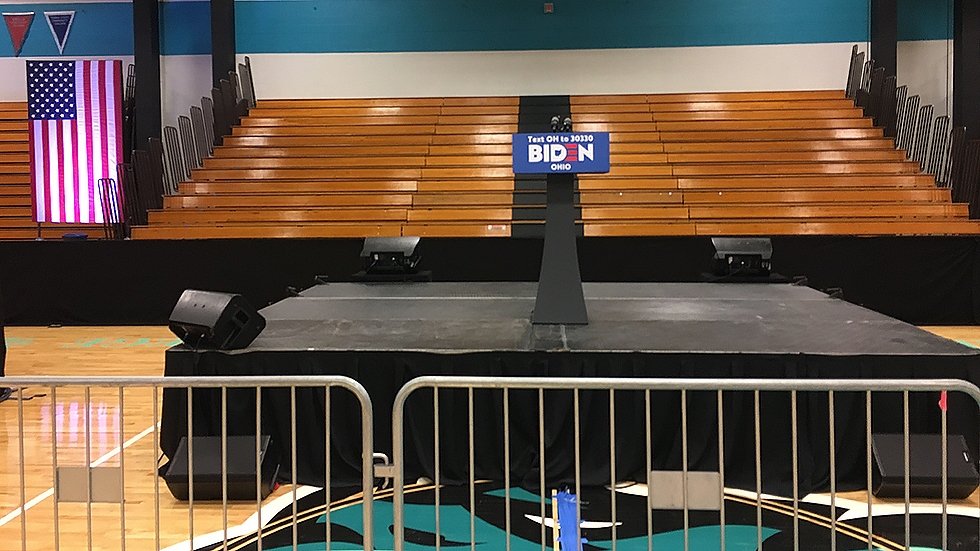 1) (Brian Brandt) – “The Biden campaign announced that Joe is self-quarantining after contact with reality.”

(Joe_Miller) – “The Biden campaign has been way ahead of the curve in preventing large gatherings of people.”

(Olsoljer) – “First time in decades the liberal crowd left a venue as clean as it was when they started.”

2) (yetanotherjohn) – “What sort of time machine is Wizbang using to get a picture from November 3rd, 2020?”

(DJD60_TX) – “We have run out of toilet paper, milk, eggs, masks and bleach.
On the plus site, we have also run out of idiots, at least for now.”

(cathymv) – “No wonder there are no leftists here…. there is an american flag in the small venue”

(Vagabond661) – “An order to evacuate was given after an AR-14 was found behind the podium.”

(Yooper) – “I always wondered what went on in VP Bidens brain.”

(guido81_MA) – “Unfortunately, a snafu resulted in the “Biden For Senate” rally being scheduled at the same time.”

5) (RadiCalMan) – “Joe, you lost everyone when you said, “Let’s all celebrate With a Coronavirus”!”

(Kenny Moore) – “In lieu of a rally, Joe provides a comprehensive exhibit displaying every valid reason to vote for him for President.”

6) (Patrick_McHargue) – “The Media relates: “Speaking to a packed crowd of Democrats, our future president outlines his vision for America!!1!””

(patriciamcc) – “A Biden rally but Biden forgot to show up as did any supporters because there are none.”

(EricSteel) – “If Joe Biden makes a gaffe in an empty room, is it still a gaffe?”

(Paul Hooson) – “How did Joe become the Democratic frontrunner compared to the other candidates?

1.No one has ever said, “Hey, that Asian guy running is pretty good. I’m voting for him…”.

2.No one said, “Hey, that homosexual guy is pretty good. I’m voting for him…”‘

(Retired military) – “Found in Biden’s hotel room next to his body with the gun mysteriously missing. “I cant take this cold cruel world anymore especially with Trump in charge. Please give all your support to Hillary. She will be a great President””

(Porkopolis) – ““Nobody goes there anymore. It’s too crowded.”
–Yogi Berra”