I’ve been referring to them as such for years.

Google’s Democrat logo of the jackass was replaced with a rat by some pranksters on Monday to great effect. Needless to say, the social media-sphere couldn’t stop circulating the results of the prank.

The prank involved changing the Google “knowledge panel” that pops up at the top right of your computer screen when you search for various things. The box is supposed to give you quick hits of information on a certain topic, allowing you to get the gist of a topic without having to search any further. Normally, when you search for the Democrat party, the star-spangled red and white donkey pops up as its representing image.

However, Mashable reported that the Democrats hadn’t actually claimed their own “knowledge panel,” leaving it susceptible to change by anyone, since knowledge panels contain information generated by the web itself, including images.

This allowed for the image to be changed for a whole 90 minutes before Google stepped in and changed it back. 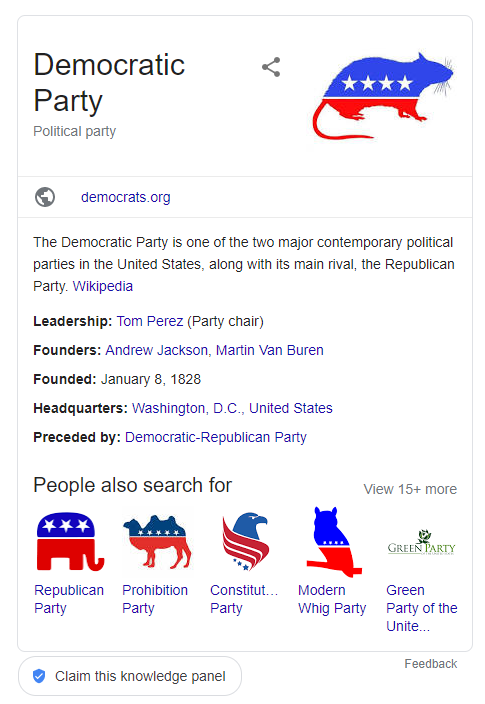 202 people are talking about this

Couldn’t happen to a more pestelential group of rodents…

In other embarassing news:

The charges against three Russian “bot” farms and 13 individuals in Mueller’s so-called Russian collusion case were dropped with prejudice on Monday. But the conclusion of the case was never in doubt.

The truth is trickling out.  Time for consequences.