This past week’s Weekend Caption Contest™ was another winner. The assignment this past week was to caption the following picture: 4) (sarahconnor2) – “Take the “How Well Do You Know Your Current President Quiz”:
Upon looking at this portrait by Rembrandt, Obama’s first thought is:

1. “I could do better.”
2. “Rembrandt was obviously a racist.”
3. “I must fire the whole racist staff of the National Gallery and have this repainted in order to atone for what happened during the Crusades and slavery in America.”
4. “That reminds me. I have a three o’clock tee time.””

5) (Joe_Miller) – “The President will never admit that he doesn’t know which President this is.”

6) (guido81_MA) – “Obama just stared silently, embarrassed to admit that he wasn’t sure if that was Keith Richards or Bob Dylan.”

The Readers Choice Award went to Rodney Dill’s winning entry. In its place we offer another editors choice.:

(yetanotherjohn) – “Obama likes European Jews … if they are depicted in 500 year old paintings.”

That’s all for this past weekend. Now that we are all caught up on winners a new edition of the Wizbang Weekend Caption Contest™ will debut in a few hours. 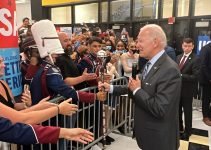