Reports have surfaced out of a closed-door session that multiple stand down orders were given the night of the attack on the mission in Benghazi. Testimony from eight men have given testimony to the House Intelligence committee that points to stand down orders having been given in more than one instance.

“The whole issue about stand down orders is not an issue,” said Rep. Devin Nunes, R-Calif., who sits on the House Intelligence Committee. “There clearly were stand down orders given to people not only in Benghazi but also in Tripoli and the State Department’s counterterrorism team.” – FOX

So requests for help were made and they were denied. Not once, but multiple times? The pleading and frantic calls from our people that night were rejected. It seems this topic has now come full circle.  Cue Susan Rice to spin it again, this time on 60 Minutes. Reminder – 60 Minutes questionably botched their Benghazi report last month. President Obama has referred to Benghazi as a ‘phony scandal’ and as ‘sloppiness’. In her interview with Leslie Stahl this past Sunday, Susan Rice didn’t want to be bothered with “a false controversy”.

“I don’t have time to think about a false controversy,” Rice said. “In the midst of all of the swirl about things like talking points, the administration has been working very, very hard across the globe to review our security of our embassies and our facilities. That’s what we ought to be focused on.” – The Blaze

Video clip of the interview via Gateway Pundit:

Sharyl Attkisson still has not received anything on Benghazi under her FOIA request.

New photos of the Benghazi mission after the attack were released that showed more detail into the devastation wrought on the compound that night. Still no situation room photo op, however. Judicial Watch had submitted a FOIA in December and February but were only given seven photos this past June. The Washington Times followed up and and reported that after they contacted the State Department, a “treasure trove” of photos was released:

But this week, after weeks of inquiries by The Times about photos it received, the State Department released a trove of photographs showing buildings and vehicles ablaze during the Sept. 11, 2012, terrorist attack that killed U.S. Ambassador J. Christopher Stevens and three other Americans. Other photos show ransacked offices, burned-out cars and Arabic graffiti scrawled on walls.

The new photos reveal a level of total devastation thoroughly belying Obama’s original cover story that the carnage was perpetrated by a bunch of random malcontents upset over an unpleasant video,” Judicial Watch President Tom Fitton said Wednesday on the group’s website. “The fact that we’ve had to wait nearly a year and file a federal lawsuit for basic documentary material of the attack shows that this administration is still in cover-up mode. And now the Obama administration brings the Benghazi stonewall to a whole new level by withholding video of the attack using frivolous arguments such as ‘privacy.’”

Wait…There is video of the attack?

A teacher working in a school in Benghazi was shot and killed.  Just this week, 13 are dead after a terrorist attack on a Benghazi military facility. No group has claimed responsibility for either set of killings. 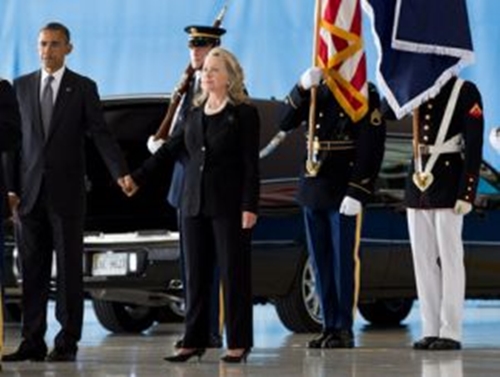