This week’s Weekend Caption Contest™ reminds us things could be worse. He could be on the road. (ulley) – “I said fix the airbag to the steering wheel not put him in the front seat.”

3) (Par4Course) – “A political maniac in an electric Cadillac.”

(EricSteel) – ““Where’s the nearest elementary school? I want to show off my new ride to the ladies.””

(RadiCalMan) – “Road Trip! Let’s go to Mir-A-Lago to see if the FBI missed anything!”

(Mary Gehman) – “The perfect choice for a Crash-Test Dummy…”

(Joe_Miller) – “He doesn’t want to drive. He’d prefer hanging out the window with his tongue flapping in the wind.”

(Brian Brandt) – “Secret Service agent’s testimony at the congressional hearing: “He reached around from the back seat and grabbed the wheel. Before I could stop him, he was in the front seat, driving toward the Capitol building. That’s when Kamala ran in front of the car and was thrown through the windshield, causing the car to swerve into a meeting of all the people in the line of succession, killing all of them. And that’s how Hillary Clinton became president.””

(McGeehee) – “No fair poaching your own material.”

(Yes, I know it’s recycled from last week. I’m doing my part to be green!)” 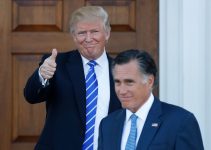