Once again, a member of the political Right has taken a false shot at President Obama.

From The Hill: “Former Rep. Joe Walsh (R-Ill.), a conservative radio host, said Thursday that President Obama “hates Israel” because he “has always been” a Muslim at heart.”

Walsh may just be throwing out red meat to the people who regularly listen to him. After all, his livelihood requires him to satisfy a large-enough radio audience.

Still, the Obama-is-a-Muslim canard isn’t helping anyone. All that it does is show just how theologically illiterate that some Americans are.

Since illiterate people are aided by photos, here are two that they should think about:

In the above photos, Obama is doing something that a Muslim wouldn’t be caught dead doing. He is wearing a yarmulke and participating in a custom that is specific to Judaism. 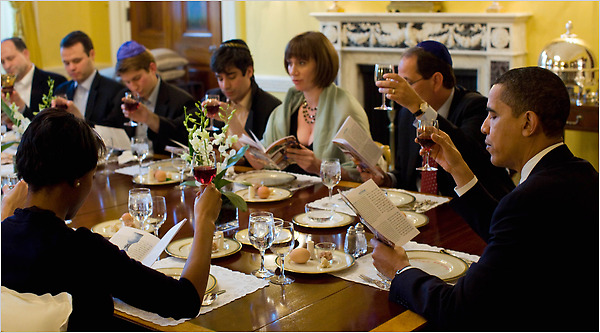 Obama’s 2009 Passover Seder included what is remembered as the Macaroon Security Standoff.

Along with doing Jewish things that no Muslim would be caught dead doing, President Obama has failed to do the things that every Muslim is required to do.

This is where the theological illiteracy comes into play. The people accusing Obama of being a Muslim haven’t demonstrated that Obama has conformed to any of the Five Pillars of Islam. Such accusers act as if they know nothing about the Five Pillars. Perhaps they don’t.

Here is what the Pillars are:

Shahadah: sincerely reciting the Muslim profession of faith.
Salat: performing ritual prayers in the proper way five times each day.
Zakat: paying an alms (or charity) tax to benefit the poor and the needy.
Sawm: fasting during the month of Ramadan.
Hajj: pilgrimage to Mecca.

All of the alleged “proof” that Obama is a Muslim isn’t proof at all. Instead, it is a poor substitute for the required proof that has yet to be presented.

By the way, that now-famous photo of Obama wearing traditional Somali garb is just that – a photo of him wearing the traditional garb of the ethnic group that Obama was visiting at the time.

If Obama is a Muslim because he wore Somali garb while visiting a Somali village, then George W. Bush is Vietnamese. The above photo shows Bush wearing Vietnamese garb while he was in Vietnam for a political conference.

Behold "The Great Unravelling."
No Evidence Of Russia-Wikileaks Connection