1) (LiberalNightmare) – “Obama and his foreign policy advisers go out for ice cream to celebrate a job well done.”

2) (Rick Adams) – “I have no idea what’s going on in this photo, but I’m pretty sure it was followed by a round of golf.”

3) (jim_m) – “You see kids, we kept these hedges here so we would always have a bush nearby that we could blame.”

4) (fustian24) – “They’re pretending to be Iraqi soldiers abandoning Baghdad. What a fun game!”

5) (yetanotherjohn) – “I once cried for a child that had no hands until I saw a man with no brain.”

6) (Bird666) – “When Obama was told to make a recess appointment, he went out to play when he heard the bell.”

(Rodney Dill) – “By force of habit the President had to have his hands in somebody’s pocket.”

Illinois Ranks as 'Worst' For Small Businesses
Wanted: A Father for Fathers Day 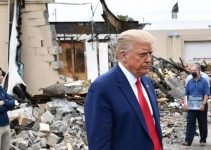