This week’s Weekend Caption Contest™ was another winner. The assignment this week was to caption the following picture: 2) (guido81_MA) – “Baldwin later apologized, telling the reporter that he merely mistook him for his teenaged daughter.”

3) (fustian24) – “Alec is starting to show real signs of maturing. It used to be he only beat up women.”

4) (Marilyn Heavener) – “Alec loses his mind when a photographer interrupts his Words With Friends game.”

6) (Proof) – “Pee Wee Herman’s Ultimate Slap Fighting” got off to an inauspicious start.”

The Readers Choice Award this week went to herddog505’s winning entry. In its place we offer one more caption that was popular with readers:

(Doc Musgrove) – “Alex will not face charges. As a special agent in the obama campaign, obama extended his executive privilege to Baldwin, shortly after denying he didn’t know Baldwin. A subsequent search of the photographer’s car revealed he was in possession of a 64oz “Big Gulp” and over 2oz of salt. Charges pending.”

Media's Disinterest in Abuse of American Indian Women in Boston
Confiscated: Obama Afraid Latinos Will Attack Him With Forks At Luncheon 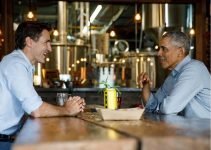