Home
2012 Presidential Race
Obama’s Narcissism: The Troops are Fighting for Me, Me, Me

Obama revealed the extent of his narcissism, his outsized sense of self-regard, this week during his hasty explanation of his flip flop on the issue of gay marriage. In his ABC News interview Obama waxed poetic about those American troops that he thinks are fighting for him as opposed to fighting for their country.

During his interview, Obama told ABC News’ Robin Roberts that he feels “constrained” in war policy, but it’s what he said before that which startles for its arrogance (my bold for emphasis).

When I think about those soldiers or airmen or marines or sailors who are out there fighting on my behalf and yet feel constrained, even now that Don’t Ask Don’t Tell is gone, because they are not able to commit themselves in a marriage, at a certain point I’ve just concluded that for me personally it is important for me to go ahead and affirm that I think same sex couples should be able to get married.

Further, the troops swear their oath of service to the Constitution of the United States, not politicians. Finally, Congress itself has certain powers over our armed forces, too, so the President is not all-powerful where our military forces are concerned.

Would that we had a real journalist in that interview. It is no surprise that the softball-pitching ABC News TV reader Robin Roberts didn’t press Obama on his arrogant assumption that our troops own their fealty to him as opposed to their country, though. After all, she was chosen for this quickie, ill-planned announcement because she is not a real reporter.

There is another reason that Obama picked a softballer for his quickie interview. He really isn’t prepared for any though questions on his new, new stance on gay marriage. Loose cannon Joe Biden forced Obama’s hand on the issue, and word is the administration is a bit torked off at ol’ Slow Joe because of it.

It is easy to understand that Obama likely could not satisfactorily answer tough questions because his team haven’t take the time to craft a well thought out policy this soon after Joe Biden’s gaffe. So, fluff TV chickie Robin Roberts got the job.

But regardless of all the political/policy machinations of this sudden reversal on gay marriage, it is more shocking that Obama imagines that it is he who is featured most prominently in the minds of our troops.

And This Helps Gays Why?
ABC's Robin Roberts has an Obamagasm on live TV 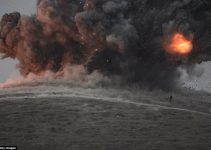