OK, this was a big weekend for the Republican presidential candidates. Michele Bachmann won the Iowa Straw Poll, Tim Pawlenty dropped out, and Rick Perry threw his ten-gallon hat into the ring. So, how do things stand right now?

Mitt Romney: Still the putative front-runner. He’s the Establishment GOP’s man, and has the record of having been governor of the bluest of the blue states. He’s also probably the most accomplished, both in politics and in the private sector, of all the candidates. He looks the most presidential, and that is something that can never be underestimated. The conventional wisdom says the nomination is his to lose.

But the vibe I get from Romney is that his support is, as the old saying goes, “a mile wide and an inch deep.” A lot of his support isn’t passionate, and he’s seen as “the best candidate to beat Obama.” To me, that says that the first time Romney stumbles, he’ll lose a good chunk of his supporters. And once that happens, his supporters will start looking like customers at a Greek bank. As a naval warfare buff, I think of the Romney campaign like the German battleship Bismarck. All the propaganda said she was the mightiest battleship afloat, but the truth was she was an obsolescent design that was far more vulnerable than anyone thought — and in the end, she was undone by  an attack from biplanes that couldn’t even reach 100 miles an hour. She started off brilliantly, destroying the pride of the British Navy and driving off a brand-new battleship, but the great ship ended up as target practice for the British Navy, and never landed a single hit on any of the ships that finally put her down. And I think Romney knows how fragile his campaign is; he skipped the straw polls, which says to me he knows he can’t afford to be seen as a loser.

Rick Perry: He’s got a decent resume’ and record of achievements. Not perfect, but being able to say that he was Texas’ governor during the economic slump has to mean something — Texas has bucked the trend and has actually been prospering. He’s a hell of a speaker, especially without a TelePrompter, and has “presidential hair.”

On the other hand, the left is going ape over him already. They’ve got the smear machine going full-tilt, and want us all to think of Perry as “another overly religious Texas governor.”The fact that Rick Perry is not George W. Bush seems to escape most of them.

Where the Romney campaign reminds me of the Bismarck, Perry’s (as new as it is) seems more like the British battleship Warspite: the “Grand Old Lady” that fought in both World Wars, collected more battle honors than any other British ship in history, repeatedly beat the odds (and the enemy), and even when being sent to the breakers for scrapping, broke loose and ran aground where she chose to end her days. Perry’s campaign will take a lot of hard hits, but will just keep going on, shrugging them off, until the bitter end.

And come to think of it, a battle between the Bismarck and the Warspite just might have been a pretty even match. The ships had a lot more in common than not.

Michele Bachmann: (Remember, One L, Two N’s) She got a big boost from the weekend, but two things must be remembered: 1) she was born in Iowa, so she had the favorite daughter thing going, and B) it was a fricking straw poll that means nothing.

Bachmann’s campaign is the antithesis of Romney’s: no big money, the establishment hates her, and her supporters are almost insanely passionate. Her support seems a mile deep, but an inch wide. She has had her share of stumbles, but just ignores them and keeps going. Any one of her verbal gaffes would probably have sunk Romney, but they simply don’t “stick” enough. Those who fixate on them weren’t going to ever vote for her anyway, and those who are going to simply don’t care. Her biggest challenge is to widen her support without making her base too shallow.

Bachmann… damn, I never should have started this “warship” metaphor. OK, she’s like the Japanese battleship Yamato — the most powerful battleship afloat, like as not to defeat any other battleship afloat — but eventually overcome by forces she simply wasn’t made to face. Radar and aircraft made her obsolete, but that doesn’t change the fact that no battleship could have withstood her on her own terms. Bachmann’s challenge is to keep the fight on her own terms.

Herman Cain: Still a long shot. He’s got a lot in common with Bachmann. Seriously, bear with me. Change Bachmann from a white woman to a black man, replace her political experience with his business experience, and it kind of hangs together. He also has a passionate base, but it’s even smaller than hers. He also has a tendency to shoot his mouth off, but some of us find that kind of refreshing as opposed to the overly cautious, carefully scripted pablum we tend to get from people like Romney… or even more so, Obama.

For a warship, I’m going to have to peg him as the “small boys” from the Battle Off Samar, when three destroyers (small warships) and four destroyer escorts (even smaller warships) escorting six escort carriers took on a Japanese force consisting of four battleships (including the Yamato), eight cruisers, and eleven destroyers) — and actually drove off the Japanese, at the cost of two destroyers, one escort, and two carriers. The “small boys” actually ended up sinking three cruisers and mauling several more ships. Cain is totally outmatched, but fierce as hell. As the saying goes, “it’s not the size of the dog in the fight, but the fight in the dog.” Win or lose, he’s going to leave his mark.

Thaddeus McCotter: By rights, I shouldn’t even include him in the lineup, but dammit I like the guy. I’ve seen him on Red Eye several times, and I like his intelligence, his wit, and his decidedly unpresidential name, looks, and hair. Especially his hair. If he only got the votes of every single one of us “follically challenged” Americans, he’d win in a landslide. He’s one of us, dammit.

But I gotta admit, he ain’t going anywhere. To me, he’s the USS Atlanta, the anti-aircraft cruiser lost at Guadalcanal. The Atlanta — the spiritual ancestor of today’s AEGIS ships — was a good idea presented too soon, and used in the wrong way. She had no business in a surface fight, at night, but still went down swinging. And in a truly tragic twist, some of the worst hits she took were from a fellow American ship.

Newt Gingrich: The guy has some great ideas, and lots of energy, and knows how to say the right things. He also has a record of achievement. But he also has way, way, way too much baggage. Also, he has the disadvantage of seeming too old. He’s an incredibly energetic 68, but he was a huge figure in the 1990’s — and essentially spent about a decade off the public stage. (Oh, he tried to stay relevant, but didn’t succeed very well.) Plus, he’s weighed down with way, way, way too much personal baggage. The guy is “damaged goods,” and simply can’t accept that.

Appropriately, I have to go back to the Civil War era to find Gingrich’s warship equivalent. The HMS Captain was one of Britain’s first turreted ships, a truly innovative design that had several very good ideas. However, due to screwups in both design and construction, she went to sea with way too much weight (or “baggage”) and was sunk by a storm that should not have troubled her.

Ron Paul: I’m including him because, if I don’t, I’ll get tons of protests. Well, Paul has his passionate supporters and good ideas, but both come wrapped in some industrial-strength crazy. He ain’t going anywhere, and thank heavens for that. For him, there are several superb candidates — the Habakkuk project, the 19th century Russian battleships that were actually round-shaped, or the USS Vesuvius, the “dynamite cruiser” that literally used giant air guns to fire its shells at the enemy. But rising above these is one ship that truly fits the Ron Paul model: Sir Jackie Fisher’s looniest idea to ever actually hit the water, the HMS Furious.

The Furious was one of the largest and fastest ships in the world when she served, and her original design included the some of biggest guns ever put to sea. But she would have had only two of those guns — one fore, one aft — and she was so poorly armored that she actually damaged herself when she fired the one gun they did fit on her.

At that point, the Royal Navy realized that they had about 20,000 tons of white elephant on their hands. So they went back to the drawing boards and figured a way to make this worthless would-be battlecruiser into an aircraft carrier. And while she was never a great carrier on paper, she was invaluable to the Royal Navy and served with great distinction and honor in both World Wars.

In this metaphor, the battleruiser Furious is Ron Paul, while the aircraft carrier Furious is Rand Paul and the Tea Party movement.

Sarah Palin: As an unannounced candidate, she’s “vaporware” at this point. She’s the ship design that could change the whole shape of the campaign. If she launches, she becomes the instant game-changer — but that’s a very big “if.” Right now, I’d peg her as the USS United States — the first “supercarrier” that ended up getting canceled right after being laid down, but triggered the “Admirals’ Revolt” that kept the US Navy from taking a back seat to the Air Force and guided the designs of every American aircraft carrier ever since. Plus, her folksy speech pattern grates on me a little, kind of like how “The USS US” would.

I could probably go on, to cover Huntsman, Johnson, Roemer, and Santorum, but I’m already over 1700 words and have exhausted the candidates I actually know much about without going all Wikipedia.

Updated: Somehow, Sarah Palin got omitted from the first version. 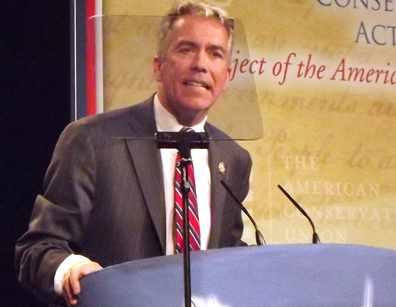