Home
Christianity
You Know Things That God Himself Does Not

I mentioned in a previous post that with school out for the semester, I am catching up on my elective reading, especially theological essays. It strikes me, just how similar the tone is at times between the stridently religious and the stridently political, even when the authors are atheist or intensely secular. There is a habit in both groups to demand agreement and to launch invective at people expressing contrary opinions. Huh.

Anyway, reading through this stuff it hit me that doctrine and dogma are very often overstated, and the major lessons are sometimes missed. What’s odd is that people so obviously familiar with Scripture, nonetheless miss the clear examples where God warns us not to become legalistic, to work to persuade through love rather than threats, to offer hope rather than contempt. Look at the lessons in the biblical book of Ruth, a Moabite woman through whom the lineage of King David runs. Look at the first Pharaoh in Genesis, the one who rose up Joseph to privilege and power through respect for his ability and integrity. Switching to the New Testament, many people vaguely recall the Roman Centurion whose faith was praised by Christ, but they forget that he was not only no Jew, there is no evidence that he became a formal disciple of Christ either. And then, of course, there is the loudest message – the one we know as the Good Samaritan. Jesus warned people many times that God looks at the heart, not the sign on the door – remember how he said that when a tax collector and a Pharisee both prayed to God, only the tax collector was reconciled, because he asked for mercy and was contrite, while the Pharisee was arrogant?

I am not saying that doctrine and dogma are not important in their own right, but we need to make sure we have our hearts right first. And nowhere is that more obvious, than when we consider the strange paradox that while God is omniscient and Man is not, we know things that God does not know!

Here’s how that works: God is absolutely pure, and therefore no sinful man may enter into His presence. As a result, even the slightest sin is an eternal barrier between us, and so represents a formidable problem, which Christ resolved by taking the penalty unto Himself on our behalf. Therefore, promises the Lord, our sins are not merely forgiven as humans think of the word, but taken away as if they never were, so that they may not in any way be a barrier between God and the people He loves. If any of us were to see God in Heaven and mention our sins from the past, he would tell us frankly and honestly, ‘I do not know what you mean. What sin?’

We, however, do remember our own sins (and many of us make a point to remember as many sins committed by other people as possible); even the Bible details sins by such heroes as David and Paul. I say ‘heroes’ not to excuse their sins, but to point out that those two are clear examples of men whose sins were forgiven, yet we also know, thousands of years later, what some of those sins were. As a result, we mortal humans actually know some things which God has denied to Himself. Oh, the logic of it makes sense to me, but it means that the Almighty has chosen to accept limited omniscience in order to be true to His word. The implications of that choice are frankly staggering, but also for another place and time.

For here, we humans might do well to ask ourselves whether our moral bearings are as true as we like to claim, and whether we ourselves might do well to put aside details and choose to see each other according to grace and hope rather than indictment and accusation. 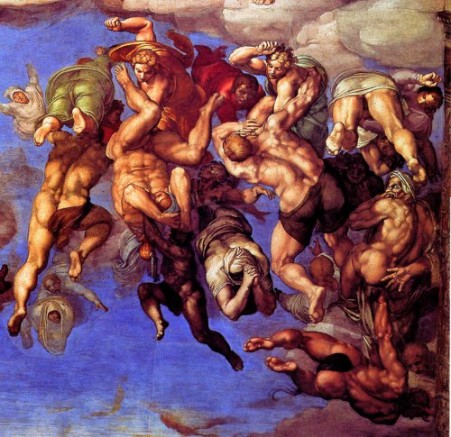