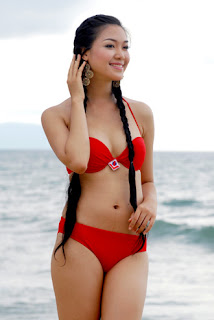 Today’s winner is Le Ngoc Cuong. He gets the award for stripping Tran Thi Thuy Dung of her title as Miss Vietnam. Why was this done? Because Ms. Thuy Dung didn’t graduate from high school.

Since when was a diploma required to win a beauty contest. Wasn’t their some airhead winner a year or two back whose answer to a question was laughable and made the rounds of You Tube? Mr. Cuong defended his actions saying “If we didn’t have the education requirement, then lots of girls would drop out of school to focus on beauty pageants, and we can’t let that happen,” Then make the diploma a requirement before hand? That would seem to be the solution.

I don’t know about you but I think Ms Thuy Dung is very well qualified to represent her country in the Miss Universe pageant. Le Ngoc Cuong is well qualified to be today’s Knucklehead of the Day. The Wall Street Journal article and another photo of Ms. Thuy Dung are below the fold.

Like many up-and-coming nations, Vietnam has been using beauty contests to quickly make its mark on the world. In July, Vietnam played host to the Miss Universe pageant, which was presided over by Jerry Springer and former Spice Girl Melanie Brown (the one known as “Scary Spice”). 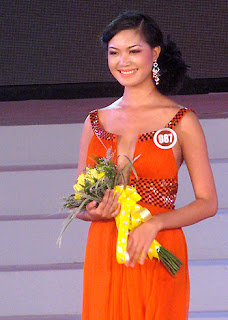 For many ordinary Vietnamese, the event was more compelling evidence that the country has arrived than joining the World Trade Organization was the year before. Newspapers and TV channels repeatedly pointed out that this was the first time Miss Universe has been held in a Communist country.

But that pride crumbled after government investigators found that the new Miss Vietnam, crowned on Aug. 31, hadn’t finished high school.

Shocked, Ministry of Culture officials stripped 18-year-old Tran Thi Thuy Dung of her most coveted prize — the right to represent Vietnam at this month’s Miss World contest in Johannesburg. Government officials in Hanoi are now trying to find a suitable candidate to send to South Africa. So far, they’ve drawn a blank.

In an interview in her hometown of Danang, in the center of Vietnam’s long, snaking coastline, Ms. Thuy Dung tried to shake off her disappointment at staying behind. “I wish Vietnam can still find the right candidate to send to Miss World, even if it isn’t me,” she said.

Other Vietnamese feel their government’s rigorous enforcement of its beauty-pageant rules has botched their chances of winning the contest. Britain and Australia don’t have any minimum educational requirement for their national beauty contests, while the U.S. gives beauty queens six months to finish high school after their first competition.

“If Ms. Thuy Dung doesn’t have a high-school diploma, she can always make it up later,” says Trung Thi Anh Nga, 22, who works in a boutique here. “If Vietnam doesn’t send a contestant to Miss World, it would be a shame and suggest we don’t have anybody beautiful enough to go.”

The head of the Ministry of Culture’s Performing Arts Agency is having none of this criticism. Le Ngoc Cuong says he has Vietnam’s reputation to protect.

“If we didn’t have the education requirement, then lots of girls would drop out of school to focus on beauty pageants, and we can’t let that happen,” says Mr. Cuong, who is also a well-known choreographer of ballets and a winner of Vietnam’s National Artist award.

Ms. Thuy Dung and her mother, Mai Thi Bich Ha, first realized she had a good shot at becoming a beauty queen when Ms. Thuy Dung turned out to be 5-feet-10-inches tall at the age of 17. Height is a major asset in Vietnamese pageants. “When we saw an advertisement in a fashion magazine inviting entrants for Miss Vietnam, I decided to enter,” Ms. Thy Dung says.

After coaching in Ho Chi Minh City and armed with a rack of clothes from her mother’s one-room back-alley store, Ms. Thuy Dung was ready for battle.

The annual Miss Vietnam pageant is fiercely contested, despite the contestants’ avowals that they are all sisters hoping to do the country proud. The competition was first held 20 years ago as Vietnam began opening up to the rest of the world following decades of war and seclusion. Just holding a pageant was a radical departure from the “everyone’s equal” ethos of the time. Kim Ninh, the Vietnam representative for the Asia Foundation think tank, who was there, says that first pageant captured the imagination of the nation. The top prize was a bicycle. She recalls that it was stolen from the winner.

The stakes have risen since then. Winners of the Miss Vietnam pageant have won scholarships to study overseas. The winner of the 2006 contest, Mai Phuong Thuy, went on to star in Vietnamese TV commercials for Procter & Gamble Co.’s Pantene shampoo, as well as in a local TV drama about a beauty queen who contracted HIV. There was also a cash prize of $9,000 at stake and the chance to compete in the annual Miss World contest.

During the nationally televised finals in Hoi An, a beach resort a few miles down the road from her home, Ms. Thuy Dung appeared to win over the judges with her humility and charm. “If I don’t win the title, it means a friend is worthier of such an honor,” Ms. Thuy Dung told the judges.

The nation was shocked, and badly divided, when news broke that Ms. Thuy Dung had dropped out of high school. “There has been a tremendous outpouring over this,” says Ms. Ninh at the Asia Foundation.

Vietnamese writer Ky Duyen worries that the country’s traditional culture and values are jeopardized by people seeking success by any means possible. She doesn’t really blame the young beauty queen in this instance, but she doesn’t like cutting corners. For Ms. Duyen, “our culture and education…are perhaps not strong enough to withstand the pressure.”

Ms. Thuy Dung, meanwhile, says she has done nothing wrong. The organizers of the Miss Vietnam contest — a group led by the state-owned ‘Pioneer’ newspaper — concede they didn’t specify that contestants must have graduated from high school.

“We competed in good faith in accordance with the regulations of the contest,” Ms. Thuy Dung says. Her mother, Ms. Bich Ha, says she took her daughter out of school earlier this year in order to prepare her for a high-school equivalency qualification that might give her a better chance of studying in the U.S.

Now Ms. Thuy Dung plans to return to school to earn her high-school diploma. If she finishes school, she could try the pageant circuit again. Meanwhile, Ms. Thuy Dung has been getting bags of letters from Vietnamese soldiers who have read about her troubles or seen the lovely young woman on TV. “When I read about your case, I felt so sorry for you,” wrote Pfc. Pham Quoc Tuan. “Please cheer up, and believe in yourself. You can achieve anything you want.”

“My parents write the replies. They won’t let me do it,” says Ms. Thuy Dung, who says she doesn’t have a boyfriend. “Lots of them haven’t finished high school, either.”

Wizbang Weekend Caption Contest™
Nostalgia Ain't What It Used To Be...