My high-school had one of the best science departments imaginable. Probably 4 of my top 5 teachers in my life were in that department. There was one lesson we had in 9th grade I wish everyone would have had. I genuinely think it would change the world.

We started the fall semester with an introduction to the metric system and the scientific method. We were required to keep a journal of all our observations about the lessons in class. One homework assignment was that we had to read the newspaper or watch the TV weatherman everyday and record the times for sunrise and sunset. Then we had to calculate the amount of daylight and dark for everyday.

After we had a few weeks of data we were required to graph it and “draw a conclusion” about our findings.

Everyone came up with the same “inescapable conclusion”…. We were “losing” about 3 minutes of sunlight a day and by mid-July, the earth would be plunged into 24 hour darkness. As we did the graphs, all but one of us got the joke. (One guy really thought we were doomed.)

After giving us a few minutes to admire our graphs and chuckle, the teacher slammed us with the power of that lesson. Just when you think you have things all figured out, there is another force of nature waiting to impale your finding.

She then followed that with 2 days of giving us the history of every goofy thing mankind “knew” only to be proven mistaken. It was a powerful few days. Science can be humbling.

I think about that lesson- well- daily. There are a few stories in the news today that bring it to mind. One is the photo-essay “In pictures: How the world is changing” run by the BBC. It is a series of photos that are supposed to “prove” global warming is real. One of them, along with its caption was a complete howler. 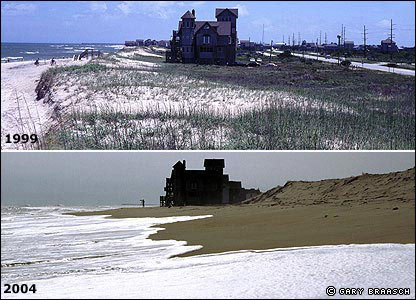 Some scientists predict that a warmer climate will trigger more violent storms, which will cause increased rates of coastal erosion. This is a section of shoreline at Cape Hatteras in North Carolina in the USA, pictured in 1999 and 2004. Rising sea levels are also expected to speed up coastal erosion.

Oh my gosh, the beach is disappearing! We’re all going to drown. — Or maybe not

Also from my high-school years I remember visiting a civil war fort named Fort Pickens on Santa Rosa Island, Florida. When the fort was built just 150 years ago, (nanoseconds in earth terms) it was a mere 150 yards from the Gulf of Mexico. But over time the beach has grown! The last time I made the hike from the Fort it was almost a half a mile to the water. In my lifetime I noticed the beach getting longer. I guess there is global warming in North Carolina and Global cooling in Florida!

These pictures are impressive at first glance but they are really little more than political propaganda.

Consider this; El Niño is a cyclical oceanographic warming and that does not fit the neat confines of our solar calendar. We don’t know why it happens, how long it has happened or if it will ever stop.

Every 11 years (or so) we get a increase of solar flares sunspots and other activity from the Sun, that disrupts radio communication. Why does it happen cyclically? We don’t know. Heck, we know it’s about an 11 year cycle but we don’t know how long it really was until after it happens.

Here’s a graphic of Solar activity: (click for full size)

Notice that around 1900 it was low and now the peaks are relatively higher? Has that caused the minimal change in temp we have recorded in the last century??? We have no freaking clue. More solar radiation makes more sense than the nonsense the BBC is pushing but (in that pesky thing called reality) we have no clue.

There are millions of cyclical things in nature we can not understand. Would it be too surprising if we learned tomorrow that every 1000 years or so the planet raises and lowers a few degrees? Indeed the planet NOT moving would be more surprising.

Every time I see a “news” story like the one above, I think of my high-school science class. Even if we have detected a true warming trend for the last 100 years, without a much greater understanding, that has no more scientific value than my ninth grade notebook.

The Rest Of The Story...
Puffery