This week’s Weekend Caption Contest™ was a royal success! This photo is even better when you realize Mayor Khan was not included and stood outside with his sad little sign pouting instead. The assignment this week was to caption the following picture: 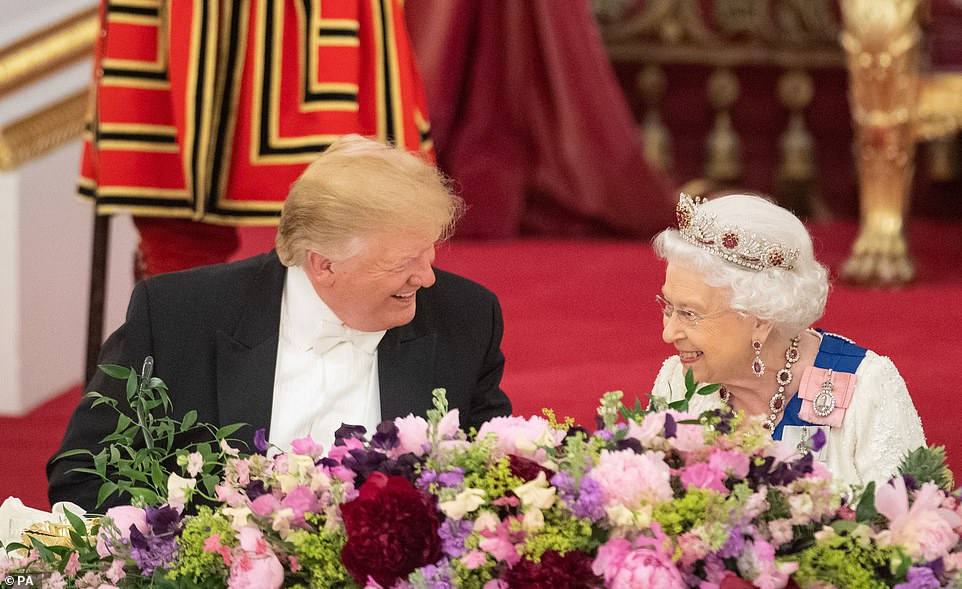 1) (fustian24) – “Then the little pussy gave us an iPod of his stupid speeches!”

(yetanotherjohn) – “Trump “So did you know that last week Hillary died?”
Queen “No I hadn’t heard”
Trump “Yes and ever since then Bill Clinton comes to the front gate of the WH and asks for her. Naturally the Secret Service let him in to see me and I have to tell him over and over that Hillary died”
Queen “Oh the poor man. Alzheimer’s is such a bad disease. But why don’t you get him some medical help or have him sent to the hospital”
Trump “Well I would but every time I tell him Hillary has died he gets such a big smile on his face and gives me the warmest hug I ever got””

4) (Rick Adams) – ““After he left, I had the Queen’s Guard take that ratty old iPod down to the firing range where they obliterated it in short order.””

(DJD60_TX) – ““Replace California with England as a state?

I like it, especially as it will drive Pelosi crazy.””

5) (RockThisTown) – “I bet you were really something before electricity!””

(Brian Brandt) – “Trump: It’s great to finally meet you. We Are the Champions is a favorite of mine.”

6) (Par4Course) – “Celebrating D-Day and laughing with the Queen. Occasionally this job has some real benefits.”

(cathymv) – “The DNC stacked the voting with super delegates, they sandbagged bernie sanders, hillary never went to Wisconsin, her people threw her into a van when she passed out, she called millions of voters deplorable, she did the most fabulous commercial where she was screeching on why she wasn’t 50 points a head in the polls, the media, who supported Hillary 100%, kept telling the world that Hillary had a 95% chance of winning…. and here I am!!”

(guido81_MA) – “So, how many times have you listened to the speeches Obama gifted to you?”