1) (Brian Brandt) -“The economy is so bad that the President is forced to rent out the White House for a furrie convention.”

2) (David Robertson) -“Obama introduces the only person capable of eating those school lunches that Michelle is pushing on children.”

4) (Stephen_Macklin) -“Even his bunny attack story is worse than Carter’s.”

5) (Retired military) -“John Kerry and his space suit were late for the egg hunt.”

6) (BluesHarper) -““The first I heard about the Easter Bunny was on the News.””

That’s all for this past weekend. A new edition of the Wizbang Weekend Caption Contest™ will debut Friday. (And I will try to get winners posted for some of the previous contests.) 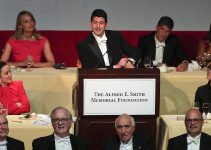