1) (David Robertson) -“Who does this guy think he is, Paul Hooson?”

6) (Paul Hooson) -““Instead of getting busy you guys are Stalin around!””

The Readers Choice Award goes to David Robertson. In its place is another caption that hit the mark:

That’s all for this past weekend. A new edition of the Wizbang Weekend Caption Contest™ will debut Friday. 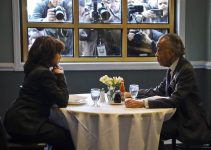