2) (GarandFan) – “If that’s the budget you’re going to submit, our next vacation had better be at the top of the list!”

4) (John H) – “I don’t think that is what Barack meant when he said he wanted to see Michelle wearing a pearl necklace.”

The Readers Choice Award this week went to Hank_M’s winning entry. In its place we offer thes excellent musical caption:

Fox News Mentions Me About Jay Leno Being Fired by NBC
Ted Turner's Son: CNN So Far Left, 'I Have a Hard Time Watching' 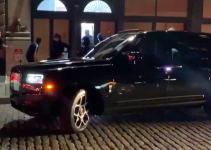