This week’s Weekend Caption Contest™ was another smashing success. There were way too many excellent captions that there just isn’t room to honor, so go read the rest of the entries for some good laughs. The assignment this week was to caption the following picture: 1) (Stephen Macklin) – “Let me be perfectly clear. I am not here to spike the football about how I killed Bin Laden.

Spiking the football about how I killed Bin Laden is not something I would do.

So I’m not going to do that. Spike the football about how I killed Bin Laden.”

5) (Joe_Miller) – “Ya know, there are so many people under the bus it won’t move anymore. That’s why I need these tougher vehicles that will roll over the folks I’m gonna be throwin’ down.”

6) (guido81_MA) – “I only came here because it is the only place I could think of where my Secret Service detail couldn’t easily get whores and liquor!”

The Readers Choice Award this week went to Stephen’s winning entry. In its place I offer one more brief but excellent caption:

(GarandFan) – “Oh, did I mention that I killed BinLaden?” 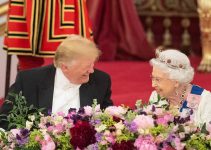