“Hawaii 5-0” actor Harry Endo, who portrayed a cerebral medical examiner who belied a real-life, dry wit, has died of a stroke in New York at the age of 87.

It takes great skill for a newspaper and one of its writers to blow the first paragraph of a story but Dan Nakaso and the Advertiser do just that. Harry Endo’s character, Che Fong, was not a medical examiner. He was a forensics expert, crime scene analyst. The Medical Examiner most often seen in the twelve-year run of Hawaii Five-0, was Doc Bergman played by actor Al Eban. 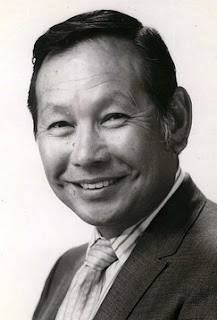 We’re not talking an obituary written thousands of miles away about an obscure show but the local newspaper reporting on the television show that portrayed Hawaii to people around the world for 12 seasons and was popular in syndication for many years afterwards. For chrissakes Five-0 repeats I believe are still broadcast weekdays by a Honolulu television station. Someone at the Advertiser should have caught Nakaso’s goof.

The mistake in the Endo obituary is just another sign of how newspaper journalism is slipping. Five-0 is a legend in the Hawaiian Islands, and Che Fong was a popular character on the show, the Advertiser couldn’t even do an article correctly about them.

Back to Endo and Five-0. The catch phrase ‘Book em Danno’ is one of the things most remembered about the television show. I’d wager fifty dollars, that if you tallied how many times those words were said and count how many times the words ‘What do you have for me Che’ were also spoken by Steve McGarret, that the Che line would come out on top. Since Five-0 is only available on DVD and only up to season five at present, I’ll have to wait a few years before being able to do that vital research.

RIP Harry Endo. The rest of the Advertiser obituary is below the fold.

Endo had made a commercial for Territorial Savings Bank and HonFed Bank when he was selected to play the character of Che Fong as one of the original cast members of “Hawaii 5-0,” which ran from 1968 to 1980 — making it one of the longest-running police dramas in television history.

“He was such a nice guy,” remembered Doug Mossman, 75, of Mililani, who played several bit parts on the show before evolving into the character of “5-0” detective Frank Kamana midway through its television run.

“One of the things about Harry is that he was very studious looking,” Mossman said yesterday. “He looked like a business guy. He worked for Territorial Savings and had that look — glasses, very studious. But he was humorous and funny, a quiet kind of humor.”

Endo’s daughter, Leslie Baker, told The Associated Press that her father was born in Colorado but spent much of his life in Hawai’i. He served in the Army in Europe as a radio operator, the AP reported, and was married for more than 60 years.

“Hawaii 5-0” featured its star, Jack Lord, playing the role of Steve McGarrett, the head of a fictional, elite unit that reported directly to the governor. The show cemented the image of Hawai’i as a gorgeous and exotic, multiethnic destination to millions of television viewers who still remember Lord’s catchphrase to his fictional second-in-command, Danny Williams: “Book ’em, Danno.”

On the show, Endo portrayed “the all-encompassing forensic genius, who was supposed to know everything about everything,” Mossman said. “The rest of us actors were very happy we didn’t have to have his dialogue with all of those $12 words. I’d look at the script and say, ‘I’m glad I’m not saying that.’

“There were times he’d be a little nervous about the line coming up and anybody else would be shaky, too. Because Jack (Lord) was a perfectionist who wanted you to get everything right, that was a double whammy pressure to get the line right — not just for the line’s sake but for Jack’s sake.”

Endo is survived by his wife, Myrtle; daughter Leslie Baker of Brooklyn; and Scott Endo of San Diego,