Home
Military
Son of a Marine

Michael H. Ferschke III, the son of a Marine who was killed on a mission in Iraq last August, was born Friday on Okinawa. Hotaru Ferschke delivered the healthy child at 1:18 p.m. at a Japanese clinic near Kadena Air Base. He weighed 7 pounds, 8.8 ounces and was 19.7 inches long.

The much-awaited arrival brings to a close another chapter in a story that began Aug. 10, when Sgt. Michael H. Ferschke Jr., a team leader with Okinawa-based 3rd Reconnaissance Battalion, 3rd Marine Division, was killed conducting door-to-door searches north of Baghdad.

It was exactly one month after Ferschke and Hotaru exchanged marriage vows by proxy while thousands of miles apart. Hotaru, supported by her in-laws, has vowed to raise her son in the Tennessee town where his father grew up.

Her son seems to be growing stronger every hour, she said Monday in her room at Yabiku Women’s Clinic. A framed photo of her and her husband taken before he deployed, as well as his ID bracelet, were at her bedside table.

“I told my husband that our baby has arrived, although I had a bit of a hard time,” she said, looking at the photo.

I wrote about the immigration difficulties Hota was running into in these posts- here and here. It isn’t over. I’ve been in contact with a member of the Ferschke family who has told me Hota’s immigrant relative petition has been turned down. What kind of fucked up immigration system do we have in this country? The wife of a fallen marine has to fight to gain entry to this country. The other Marines in Michael’s unit and their wives have been very supportive.

I’ll save that for another post. Lets celebrate a very special child that just came into the world. God bless Hota and little Mikey and all the Ferschke family. The rest of the Stars and Stripes article is below the fold.

She said the photo was with her while she was in the labor room.

“The baby has his father’s mouth, eyes and hairline,” she said. “But he got my nose.”

She said her husband’s parents, whom she first met in Tennessee during Christmas 2007, are to arrive on Okinawa next month to see their new grandson and make arrangements to bring him and his mother to their home in Marysville, Tenn.

“I do have some anxiety in moving to an unfamiliar place,” she said. “But I also know that my parents-in-law and all the family there will be always with us. They treat me like their own daughter.”

She said she would soon apply for a passport for the baby, and her six-month temporary visa should be ready before they leave for the United States in late February.

She said she was grateful for all the help provided by the U.S. Consulate and the Marine Corps to process the paperwork for the visa and passport.

At first, she will be on a six-month temporary visa, which can be extended for another six months. She and her family in the States hope to change the visa status before the visa expires.

Help and support has been “bountiful” from Ferschke’s unit, she said. Soon after the battalion returned from Iraq in November, a group of Marines took her to a dinner. They called Sgt. Ferschke their brother and asserted that Hotaru was their sister and the baby their nephew, she said.

Also, the battalion’s wives group held a surprise baby shower for her.

“They offered so many gifts that they [hardly fit] in my car,” Hotaru said. “I was overwhelmed by their warm thoughts.”

As she remembered the events during the past year, tears welled.

“Had it not been for the baby, I would never have got over from the shock [of Michael’s death],” she said.

While in Iraq, Michael Ferschke kept a running letter in diary form for his bride. The last page was written only a few hours before he went out on his last mission.

The last sentence was: “I love you.”

“The diary, or the log book, that is so precious to me. [It] will be a valuable treasure for our baby because he will be able to see his father’s own handwriting,” she said.

“I truly feel how fortunate and lucky I am to be able to meet someone like him.”

Incredibly Wild Hollywood Style Speculation
Restructuring By Example: The Banks Show the Automakers How To Do It 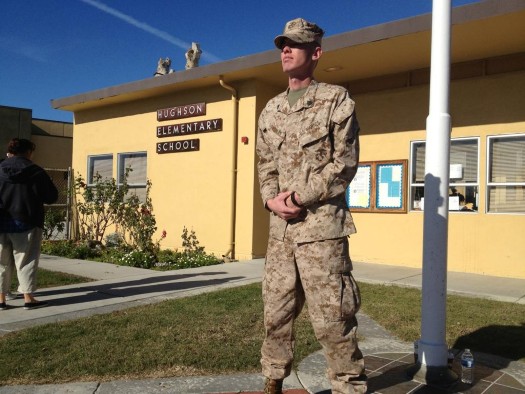