A billboard company in New Zealand is taking an interesting approach.

WELLINGTON, New Zealand – A thief caught on camera stealing expensive equipment picked the wrong target if wanted to keep a low profile: a billboard company that has plastered his image around New Zealand’s largest city seeking his capture. 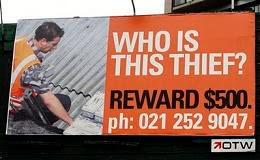 The unidentified thief was photographed by a suspicious onlooker as he uncoupled 15 electrical transformers used to boost the lighting on a billboard in Auckland.

So when the photographer offered pictures of the thief in action it cost Venter nothing to mount the images on four city billboards with the inscription: “Who is this Thief? Reward $500.”

The photo of “the ratbag” was “too good an opportunity to let go,” Venter told The Associated Press. “We’ve all had stuff stolen … but usually they don’t leave this calling card.”

He said he had received more than 100 calls since the photograph was posted six days ago, though most were calls supporting his campaign rather than offering information on the crime.

Wellington has a population of 400,000 give or take a little. With all the publicity this gets and the use of the creative use billboards, I’m betting the thief gets caught.

First Buy
The Knucklehead of the Day award