Be glad you’re not traveling to Thailand right now. From AP–

BANGKOK, Thailand – Thousands of bleary-eyed tourists mingled with yellow-clad protesters who brought flights to a halt at Bangkok’s international airport Wednesday, dealing a major blow to Thailand’s tourism industry during its peak season. 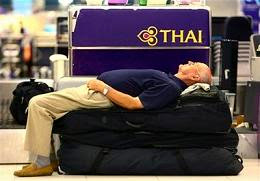 The tourism industry, which makes up 6 percent of the economy and employs about a million people, was already flagging after protesters in late August shut down airports serving popular beach resorts in Thailand’s south.

With the latest unrest paralyzing the airport — which handles about 40 million passengers a year — during the peak tourist season, and TV networks broadcasting images of the chaos worldwide, the damage this time is likely to be more severe.

“Our main concern is to get the first flight home and never come back,” said Australian newlywed Robert Grieve, 32, drinking a can of Heineken at 9 a.m. as he leaned against a vacated Thai Airways check-in counter. “I haven’t even seen any staff since last night.”

Fred Thierry, a Shanghai-based French executive with a printing materials company, had been stranded at the airport since 8 p.m. Tuesday.

“I have some meetings in Shanghai today,” he said. “I had a big meeting with big customers.”

Bangkok’s Suvarnabhumi airport was shut down Tuesday after thousands of protesters — dressed in yellow to symbolize loyalty to Thailand’s revered king — stormed the complex. Some of them were masked and carrying metal rods.

Sounds like non-thinking hooligans to me. What could possibly be the reasoning of the people who caused the airport to close? Turists and ordinary people who work at the facility are more likely to be angry than sympathetic to any cause the protesters support.

I’ve experienced a airport closing once in my life. It was December 1st 1989, and I was flying to Manila Philippines to meet my wife who would a few days later be going for her embassy interview in order to immigrate to the USA. A coup attempt happened in Manila that day and I got stranded in Seoul South Korea.

One of the coup plotters is now a Senator. They have a funny way of penalizing traitors in that part of the world. Will one of the Thai protesters benefit from the chaos they caused like Gregorio Honasan has?

Update- I will give Gregorio credit. He and the 89 plotters knew how to try toppling a government, today when a so called coup attempt happens in the PI, the only threat caused is to hotel guests and a people trying to get married.

Bob Gates to stay on as SECDEF in Obama administration?
The corrupting influence of cellphones and the internet