Pelosi’s position as Speaker of the House is really going to her head. If she keeps this up, soon her aides will have to grease the sides of her head just to get her through the doors of the House.

A new Congress convenes today with a narrow Democratic majority lording over a despondent Republican minority.

While the full weight of Republicans’ powerlessness sinks in after 12 years of control, Democrats are celebrating the historic election today of the first female speaker of the House.

“We have waited over 200 years for this time to come,” Mrs. Pelosi said on the eve of her selection as speaker, a position that makes her second in line to the presidency after Vice President Dick Cheney.

“We will not just break through a glass ceiling, we will break through a marble ceiling,” she said. “In more than 200 years of history, there was an established pecking order — and I cut in line.”

After calling herself “the most powerful woman in America,” Mrs. Pelosi flexed her right muscle like a weight lifter to much applause at an event yesterday titled a “women’s tea.”

“All right, let’s hear it for the power,” she screamed as the jubilant applause continued.

Wow. That’s really Obnoxious. Humility is far more attractive than arrogance, something she has yet to learn. It would also be smart for her to remember that the American voters put her in this position, and they can take it away from her. Let’s pray that’s the case two years from now.

And as USMC Pilot correctly reminded me, her own Democratic party could remove her from the office of Speaker sooner than two years if they become tired of her obnoxious attitude.

Are you happy with this big celebration that Nancy Pelosi has planned for herself? Is it a bit unseemly to have Stevie Wonder and Tony Bennett and the dinners and the lunches and the brunches and the trip to Baltimore to rename the street in honor of her. Isn’t this a little bit too imperial?

I’d say that comment must have smarted, but I don’t think Nancy is feeling any pain right now. 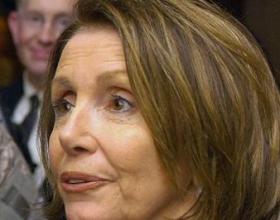