Several years ago, Peter David joined up with Neil Gaiman and Harlan Ellison for a speaking tour, billing themselves as “the Three High Verbals.” Their Boston appearance was very near my birthday, so I was taken as a birthday present. (I ended up paying for it all, but that’s another story.) I carried with me several of Peter David’s books, but the autograph line (especially for the other two) was too long, so I failed.

Last year, at Shore Leave 27, I again brought along the books. I got to hear Peter David speak, and even got to exchange a few words with him. However, idiot that I am, I left the books at my friends’ home.

This year, though, I made sure I had the books, and on Saturday I attended PAD’s reading. Only six of us showed up (well, eight, but he sent away the first two because they were the only ones), and he read us two scripts he’d written for Marvel Comics’ “young readers” title, “Marvel Adventures Spider-Man.” One of them will be coming out soon, and even though I know how they go, I might have to grab ’em anyway. But I did not get to get his autograph.

Sunday, he read another script (“Spike Vs. Dracula #5,”) and it sounds as great as the rest of the series. But finally I made my move. I got him to sign my hardcovers of “Imzadi” and “Dark Mirror.”

And then I went back through the line, forked over $20 for “Writing For Comics With Peter David,” and got him to sign that, too. I gave him a little ribbing about the Stan Lee blurb on the cover (“I can’t think of anyone better qualified to give advice on comicbook writing than the multi-talented Peter David. I’ve been a fan of his for years and will be first on line to buy his book. “) — “After Stan said such nice things, you won’t give him a free copy?”

The second time through, I was fortified in my courage, and my able host (known for this posting as “Jay Paparazzo”) captured photographic evidence.

I can die a happy nerd now… I have THREE books autographed by Peter David. 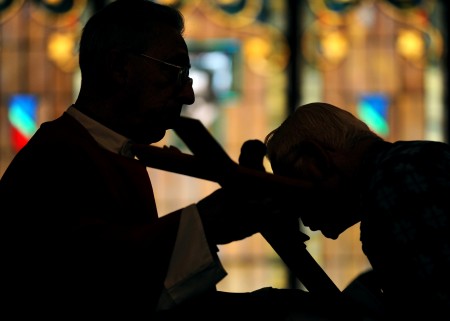