Home
Military
They also serve, those who only sit and type

Once when I was in college, I got involved in a rollicking game of “Scruples.” It came to be my turn, and I was presented with this dilemma:

“Your country has been invaded. Do you volunteer to serve in the military?”

I unhesitatingly answered “yes,” and that triggered a rash as every single other player raced to call BS on me. The winner finally got to outline exactly why he (and the others) thought I would never volunteer to serve.

I listened politely to his aspersions on my character, then when he was done, I answered him.

First, I acknowledged that nearly everything he said was true. But there were a couple things he didn’t mention. First, several members of my family served in the military honorably (my father got a “ruptured duck” from the Army Air Force in World War II), so there’s a tradition to follow. Second, I told them how I had proudly registered for Selective Service on my 18th birthday.

But then I got to the real meat of my defense. I started outlining my health issues. I spelled out about a dozen existing and potential medical conditions I have.

“If I go down and volunteer the first day, they’ll reject me on the spot — and won’t bother me again. Since I’d flunk anyway, I might as well get it over with and waste as little of both their time and mine.”

Obviously, I won that round.

I bring up this story on today, V-E Day, of all days to answer a few critics of mine (and others) who denounce those who support the war, but never served in the military. It’s the “chickenhawk” argument, and I’ve never bought it.

The idea of “you can’t argue about something unless you lived it, or are willing to live it” is bogus. It’s a slightly intellectualized version of the classic Jerry Springer defense, “you don’t know me, so you can’t judge me.”

The idea that one must have worn a uniform to understand issues of national security is absurd. And that’s exactly what the decision to use the military is — a decision of national security. The only factor that should determine whether or not to use military force — when our country asks those men and women who have agreed to go in harm’s way in service to our nation — is when it’s a question of the nation’s security.

And so, on this day, this 60th anniversary of the end of World War II in Europe, I’d like to publicly thank and praise those who do every day that which I never could — put on our nation’s uniform and put their lives on the line.

“Good people sleep peaceably in their beds at night only because rough men stand ready to do violence on their behalf.”

And with that, I’m going to bed. Thank you, rough men and women. 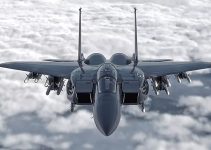