Right-wing pundit Sean Hannity is becoming unhinged. That is the conclusion of this writer after hearing the rant that Hannity gave on 08/03/16.

“If in 96 days Trump loses this election, I am pointing the finger directly at people like Paul Ryan and Mitch McConnell and Lindsey Graham and John McCain.”

Hannity hasn’t been more wrong since he supported the lawlessness of Cliven Bundy.

If Trump loses in November, then it will be because of Trump, not because of anyone else.

It is no wonder that the Wall Street Journal’s deputy editorial-page editor Bret Stephens tweeted that Hannity is Fox News’ dumbest anchor. 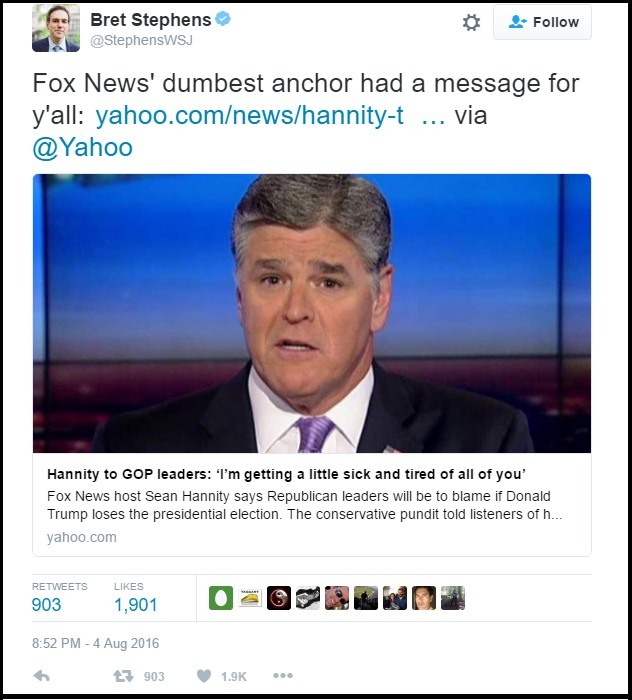 Keep in mind that the Wall Street Journal is owned by the same company that owns the Fox News Channel.

Wall Street Journal columnist Peggy Noonan isn’t buying what Hannity is selling, either. In her 08/04/16 column, she writes, “I think this week marked a certain coming to terms with where the election is going. Politics is about trends and tendencies. The trends for Donald Trump are not good, and he tends not to change. All the damage done to him this week was self-inflicted. The arrows he’s taken are arrows he shot.”

Noonan’s column is accompanied by this editorial cartoon by Chad Crowe: 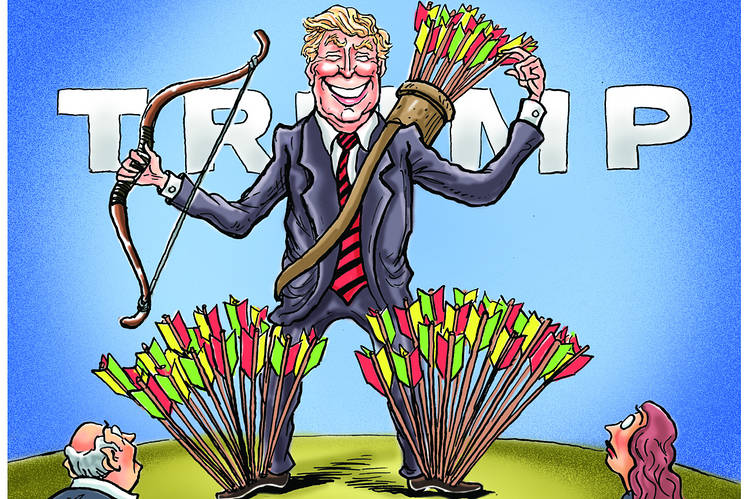 Fox News contributor Dr. Charles Krauthammer has given his own analysis of Trump’s behavior and has concluded that Trump isn’t fit to be President. In short, others can see the handwriting on the wall, but Hannity can’t. So, instead of admitting that Trump would have himself to blame for a loss in November, Hannity resorts to looking for scapegoats.

Oh well, at least Hannity admits that he is not a journalist. I end with a new word, at least new to me. A friend called it to my attention. It speaks of the moment we’re in. It is “kakistocracy,” from the Greek. It means government by the worst persons, by the least qualified or most unprincipled. We’re on our way there, aren’t we? We’re going to have to make our way through it together.