Today’s winners are Golf World magazine and its editor Geoff Russell. They get the award for their February 16th 2009 issue which contained a preview of the LPGA Tour. The US based Ladies Professional golf tour began play in Hawaii last Feb 12th. 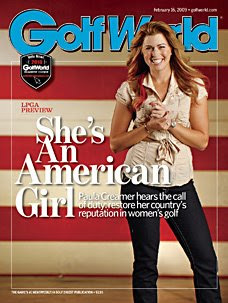 Why do I give Golf World and Geoff Russell the Knucklehead? It is the untimeliness of their preview issue. The magazine came out last week, the same week as play some subscribers like myself didn’t get the preview till yesterday or three days after the first tournament of the year was already completed.

Golf world rewards its customers by giving them week old news. Its a sports news publication, and all the tournament reports they give are almost a week old by the time a reader sees them. That’s understandable. What is not understandable is why a Tour preview issue had to be late?

In the past Golf World did their preview in the magazine they reached subscribers anywhere from 3-7 days before the first tournament of the year was played.(Check out the date of last year’s, February 8th) This year we got a golf course architecture when the LPGA preview should have come instead. Golf architecture can be talked about anytime, that news rarely becomes dated.

I emailed Russell when I saw the LPGA preview was late, he said it was coming in the next issue. When I told him that would arrive too late for subscribers, I got no reply. This is my reply now, as will be the cancellation of my subscription when it comes up for renewal. I should have ended it long ago. I learn more about ladies professional golf from bloggers like Bruce, Ryan, and Ken than I do from Golf World where the writer who most often writes about the LPGA, Ron Sirak, I’ve shown to be a complete idiot on more than one occasion. Take for instance when he chose a golfer to win the LPGA Championship who wasn’t even in the field. Just last week Sirak neglected to list Ji-Yai Shin as won of the five rookies to watch in 2009. She has only won over 20 events worldwide, three of which are LPGA and one was a major. Shin could be player of the year but somehow isn’t a rookie to watch. Sirak is laughable, Why should anyone pay for the print magazine, when they can learn more on the web and in a timelier fashion. I wrote an LPGA preview that came out the morning play started.

For not giving their subscribers their money’s worth, I name Golf World magazine and its editor Geoff Russell today’s Knuckleheads of the Day.