Last week’s Weekend Caption Contest™ brought out the potty humor, which meant it was an obvious success. While the winner announcement was delayed, the winners; unlike the contents of the pictured diaper, really did get better with age. The assignment was to caption the following picture: 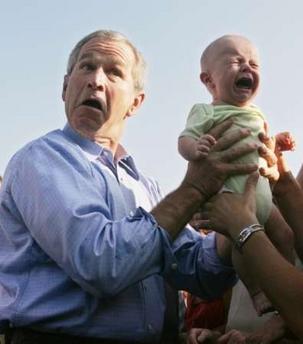 2) (Weegie) – “You sure he’s not a Democrat? He’s crying, he’s incoherent and he’s soiled his diapers. Sounds like a Democrat to me.“

4) (FreakyBoy) – “After thoroughly washing his hands and changing his soiled shirt and shoes, President Bush returned to the Oval Office and rescinded his veto of the fetal stem cell research bill.“

The Way, Way, Way Inside Award goes to:

Winners for this week will follow in a few minutes…