This week’s Weekend Caption Contest™ celebrates the Biden Follies and their ever popular tone deaf adventures. Have fun riding that large plane to a warm Caribbean vacation with expensive food. 2) Everyone who submitted a Stairway to Heaven caption.

(yetanotherjohn) – “So looking closely at the people in this photo, if Air Force One were to crash, who would survive?

The United States of America.”

(Tom Morrow) – “Is it really a Biden Christmas vacation without Hunter, his crack pipe and his crack ho-ho-ho?“”

(RockThisTown) – “Pretty sure Joe’s Aviators won’t help the optics of flying to St. Croix while thousands of Americans are without power & can’t pay their heating bill.” 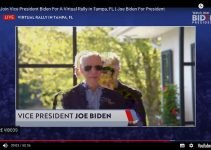