This week’s Weekend Caption Contest™ reminds us all that if it hadn’t been for Harry Reid’s actions, we would have a liberal majority SCOTUS.
Thanks, Harry! (Olsoljer) – “Why is that flag on a box? I hate country music, there are weeds on the stage, I can’t read the teleprompter, president Kamala is not here and what state am I in? JILL! JILL!”

4)(yetanotherjohn) – “Would someone mind checking the coffin to see if Fustian is there?”

(patriciamcc) – “Pretending Harry Reid was a decent man is like pretending Joe Biden and Nancy Pelosi are decent human beings. They are all pond scum, enemies of our country.”

(Par4Course) – “Biden, gazing at the flag-draped coffin, “I wonder who the hell is in there.””

(KaptainKrude) – “….And now if you’ll join me in the opening of the casket and the traditional sniffing of the hair….”

(Joe_Miller) – “He’s mixed up his speeches. He’s calling Harry Reid Bull Connor…and how he needs to get vaxxed.”

(retired military) – “The Biden presidency is so bad not only did they have a funeral for it but they are trying to upsell their message with a Hillary 2024 run.” 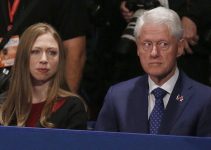