Benjamin Franklin famously stated that the Constitutional Convention had produced a Republic, “If you can keep it.”  We are at that crossroads now.

…It’s likely that Texas made it clear that the willingness of SCOTUS to decline the case was likely much higher if Texas was alone in making the claim.  But when 17 states are asking for Court intervention and a chance to express their displeasure, it is much more difficult for SCOTUS to not take some action [as pointed out here].

As to the theory of the case.

[hypothesis, a] …hypothetical about 20 states, with a combined 280 electoral votes, and all dominated by Party X “conspiring” with each other to engineer their election outcomes so that their 280 votes were guaranteed for the Presidential candidate of Party X. They carried out their “agreement” by using control of the election process in their states through rules and regulations – or ignoring same – to ensure more votes for the candidate of Party X than for his opponent, and the arrangement creates in perpetuity a President of Party X.

Once this cheat is allowed to stand, it is almost impossible to break it.

Article II of the Constitution leaves it to each state legislature to determine the manner in which the state’s Electors are chosen for the Electoral College. It seems to be a given that the Framers assumed the elected officials of each state responsible for deciding and carrying out the manner for selecting electors would manage the process in an ethical and legal fashion given the gravity of the obligation.

This is particularly important when taken in conjunction with Article IV Section 4:

Section 4. The United States shall guarantee to every State in this Union a Republican Form of Government, and shall protect each of them against Invasion; and on Application of the Legislature, or of the Executive (when the Legislature cannot be convened) against domestic Violence.

Indeed, I would argue that the States which have allowed their election laws and processes to be corrupted such that they are single party entities have failed in their duty to provide their citizens and that all three branches of the Government of the United States have a positive duty to correct this situation.

Modern technology and data analytics being what they have become, the electoral process of each state has now itself become a partisan battleground prior to a single vote being cast, with political parties and political interest groups using a variety of means to compel election officials to act – or not act – in ways the party or interest group believe gives an advantage to its candidates.

Indeed.  I predicted before the first vote was cast (including various early voting states) that Election 2020 would be dragged into the Courts, because of the battlefield preparations evident before the election.  What I failed to realize was just how comprehensive the cheat was.  What they failed to realize was the size of the electorate which would vote for Trump.

State actors are often partisans themselves, and seemingly take actions – or fail to act – in ways that are interpreted as being motivated by their partisan interests. The combination of “shaping” the battlefield of the election process prior to Election day, and influencing the actions and inactions of Elections Officials at the state or local level in the process of counting the votes, has now led to allegations that the outcome of the election has been corrupted by partisan interests that put vote totals ahead of fairness, integrity or transparency in the process of arriving at those totals.

Party X has embraced the political tools of Jughashvili; who votes matters less than who counts the votes.

These are the only two offices where the voting in one state has a direct impact on the voters of other states. For those two offices, do states have cognizable rights to expect that each and every other state will conduct elections for President and Vice President in a manner that guarantees ballot integrity, and a fair and accurate count of the votes?

I certainly hold that the States do have such a right, and that all States have a duty to ensure their elections are fair, honest, and transparent.

We have arrived at this Constitutional Crisis via the machinations of Party X and the derp state, abetted by the adherents of the derp state within party y. 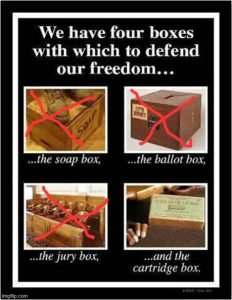 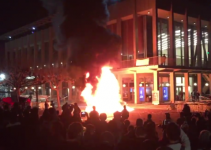