Home
Sign Of The Times
An Era Ends, Has A New One Arrived?

First, the end of an era. 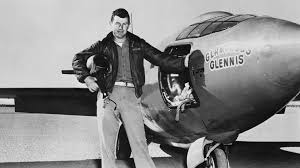 His flying career spanned the most dangerous (for pilots) era of the first and second generation jet aircraft.

As Glenn Instapundit Reynolds noted, his was a life well lived.

And on the same day we have news that may signal a new age.

I have no strong opinion as to the reliability of this report.

This “Galactic Federation” has supposedly been in contact with Israel and the US for years, but are keeping themselves a secret to prevent hysteria until humanity is ready.

Has the State of Israel made contact with aliens?

According to retired Israeli general and current professor Haim Eshed, the answer is yes, but this has been kept a secret because “humanity isn’t ready.”

Speaking in an interview to Yediot Aharonot, Eshed – who served as the head of Israel’s space security program for nearly 30 years and is a three-time recipient of the Israel Security Award – explained that Israel and the US have both been dealing with aliens for years.

And this by no means refers to immigrants, with Eshed clarifying the existence of a “Galactic Federation.”

It will be interesting to see where this story goes…  Click on over to the article and form your own opinion.