Home
2020 Election
Floors and Ceilings: A Look at the Race at the End of September 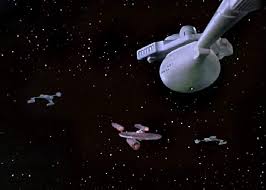 So here we are, finishing the month of September, still saddled with the Virus worries from summer and a media so in the tank for Biden it would be funny if so many people’s futures were not at stake.

But here we are, less than a day gone from the President’s 2 against 1 bout versus Joe Biden and Chris Wallace, which met with mixed reviews. I may have some thoughts about that, but for here I want to address the race condition. The national polls, as we know, say Joe Biden is in great shape, and the media tells us the same thing about the state polls. And of course I have something to say about that, but first I want to set the stage.

Elections are not decided all at once, and while polls like to make elections look like a track or horse race where someone builds a lead, in reality there is no such lead until people actually start voting. This is crucial to understanding elections, because while a candidate can build support, they need to find ways to keep that support active and look attractive to the public.

That’s not to say that candidates don’t build permanent support: They do. But initial support is always soft and only becomes deep and hard over time. A smart campaign manager understands the character of his candidate’s support.

Every candidate also forms a floor, the support level he/she will maintain or exceed at all times, and a ceiling, the maximum level the candidate can take and hold. Ideally, a candidate raises his/her floor and keeps the ceiling high. But it’s important to understand how the floors and ceilings affect re-election campaigns.

Political analysts know that incumbents usually win re-election. Some of that comes down to name recognition, but it’s also that the incumbent has built a reputation in their work. A challenger who promises to do great things has to overcome what the incumbent says they already did. On the other hand, many challengers build early support by criticizing things the incumbent failed to do, or did which offended voters. This is why Mitt Romney took an early lead against President Obama in 2012. But Romney could not hold the lead and lost.

Putting that frame on 2020, Joe Biden has worked hard to avoid specifics which could hurt his image, even if doing so costs him the opportunity to raise his profile. Meanwhile, Trump is well-known for a noisy, egotistical style combined with lots of results. This means that Joe Biden has a higher floor than Trump, but Trump has a higher ceiling than Biden.

With that in mind, keep in mind that there are undecided voters all the way to the election. The polls like to say the number of undecided ranges from 3% to 8% most of the time, but keep in mind that people who are undecided about whether to vote or who really have no idea who they will vote for, do not as a general rule feel like talking to pollsters – the people cited as ‘undecided’ by the polls are leaning towards voting and tend to prefer a candidate, but the ones who decide very late are almost never caught by the polls.

Some people attack polls, claiming they are garbage, but if you read them right you can get good information on them. This article will illustrate that point with a simple evaluation of the state polls, using a few simple but important rules put in place ahead of the calculation.

I start with an empty map, here (map template courtesy of 270to win.com) 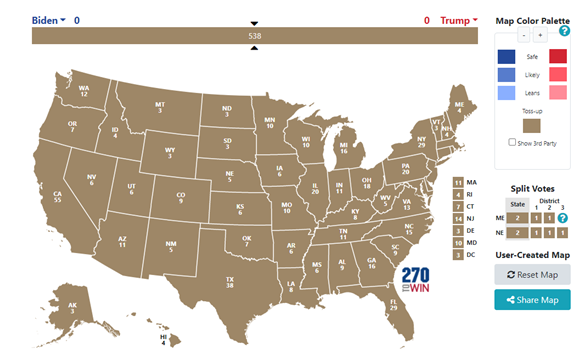 And put my rules in place. First, I am ignoring the national polls for purposes of projecting how the states and district races (56 of them) will play out. But there are still a lot of state polls available for our use.

For the 2016 election, RealClearPolitics shows there were two-hundred-eighty-seven (287) polls taken in the fifty-six states and districts with electoral votes. I don’t mean 287 poll reports. I mean if a polling group published polls in a state, that counts as one poll whether they publish one report or a dozen over the campaign. For comparison, so far in 2020 there have been one-hundred-sixty-eight (168) polls taken so far. But I don’t play the aggregation nonsense, because that’s just cramming everything together on the assumption that mob logic works. Instead, I look at the polls which ran in both years in the same states. Oddly, there are only sixty-six (66) of those polls. So what I want to do is key on the biggest mistake in the 2016 polls, which is Trump’s support. I focus on that for the following reasons:

1. Trump’s support is the common metric between 2016 and 2020. Biden is different in some ways from Clinton, not only in personality but also in political strategy.
2. Poll undercounting of Trump’s support was the biggest issue in 2016, and polls have not done anything to correct for that this year, meaning that they are likely to undercount Trump’s support again this year

So with that in mind, let’s continue.

The sixty-six polls which show up for the same state/district in 2016 and 2020 only showed up in sixteen (16) states. So those sixteen states will form the starting counts:

Florida is the most significant state in the 2020 election. So I will use Florida to show how these apply and develop a projection.

Gravis gave Trump a 45% level of support in Florida at the end of September 2016. This year Gravis only gives Trump 43% at this time, so that lowers the Gravis Florida projection for Trump by 2 points;

Mason-Dixon gave Trump a 42% level of support in Florida at the end of September 2016. This year Mason-Dixon gives Trump 46% at this time, so that raises the Mason-Dixon Florida projection for Trump by 4 points;

PPP gave Trump a 44% level of support in Florida at the end of September 2016. This year PPP gives Trump 44% at this time, so that keeps the PPP Florida projection for the same level;

Quinnipiac gave Trump a 43% level of support in Florida at the end of September 2016. This year Quinnipiac gives Trump 45% at this time, so that raises the Quinnipiac Florida projection for Trump by 2 points;

The six polls provide an average gain of 3.3 points, which when added to his 2016 support in Florida of 48.6% raises his projected support to 51.7% and a clear win.

Now that you see how that works, here’s how the state poll changes affect the state races:

Pennsylvania sees Trump’s support go up by 4.4 points to 52.6% and another win.

Now it’s not all good news. Despite a lot of stories indicating Minnesota is in play, Trump is running a point down from this position in 2016, projecting just 43.9% support for Trump and the state going to Biden.

But in a surprise, Trump’s numbers are up by 5.0 points in Virginia, projecting 49.4% support which would be good enough to win the state.

Then comes Ohio, where Trump gained 0.5 points, and at 51.8% support wins the Buckeye state again.

Then comes Arizona, which was supposed to be trouble for the President. However, the consistent state polls show Trump up 1.5 points from 2016, and the projected 49.6% support would be enough to win the state.

Then comes Georgia, where Trump gains 1.8 points and this projects 52.3% support and winning the state.

Another surprise is New Hampshire, where consistent state polls show a 4.0 point gain for Trump, which means 50.5% support and winning the state.

Next up is New Jersey, where consistent state polls show a 2.5 point loss for Trump, and the 39.5% support for Trump means Biden wins that state.

Next up is Iowa, where the consistent state polls show a 4.0 point gain, raising Trump to 55.2% support and another state win.

Now we go to South Carolina, where the consistent state polls show a 4.5 point gain for Trump, giving him 59.4% support and winning the state.

On now to Massachusetts, where the consistent state polls show Trump has lost 3.0 points, dropping to 30.5% support and a Biden win in this state.

Finally, we go to Vermont, where Trump has improved by an impressive 7.5 points, but that only raises him to 40.1% and Biden still wins the state.

The effect of these seventeen states is big – Trump takes a 205 to 38 EV lead in those states. Our map now looks like this: 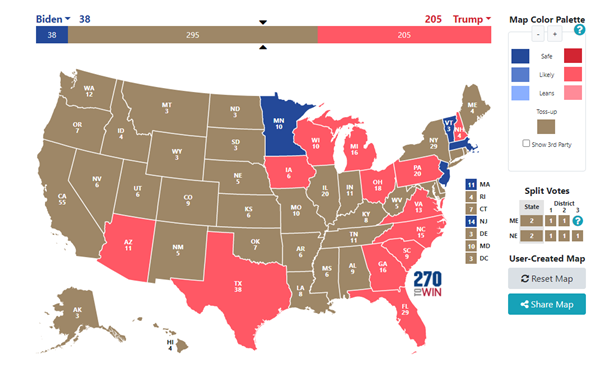 But are we stuck? Actually, no, we can go a bit further. It’s an assumption, but a safe one I think, to say that a state or district which went for the Republican or Democrat by 20 points or more in 2016 will do the same in 2020. That allows us to apply the following states/districts to Biden:

And the following states/districts to Trump: 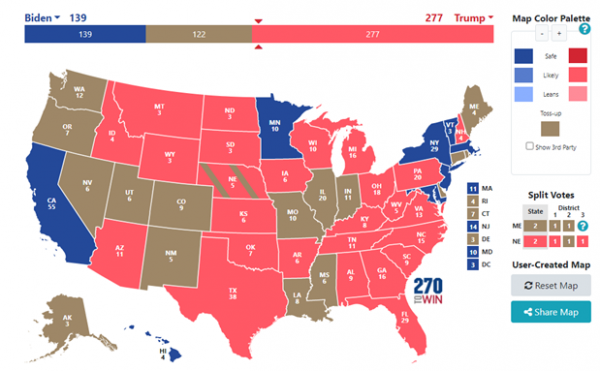 It’s not hard to see that this trends well for Trump.

From this point I am just spitballing, but I think the remaining states can be filled in as follows: 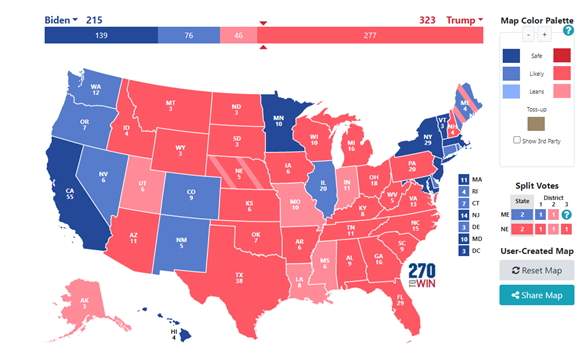 Now I want to caution everyone that this is not how things will definitely finish. A bad debate performance, a dirty trick from the media, or complacent Republican voters could all do damage that costs the election.

But if we build on the work already done, make sure to get out our vote, and stay energized, we are on track for a win. 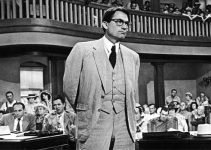