Anything can happen once.  Twice can be coincidence.  Three or more times is enemy action.

While the “protests” riots and arson have so far been an exclusive artifact of the bluest of blue urban areas of the Republic, the sheer number of such incidents strongly suggests enemy action.  We have a very good idea of who that enemy is.

Trump declared Antifa a terrorist organization, and Democrats are worried

By Andrea Widberg, the American Thinker

On Sunday, President Trump took aim at Antifa, which apparently has driven the violent side of the protests ripping through America’s Democrat-run cities. With full-throated support from Attorney General Barr, Trump is designating Antifa as a terrorist organization. This is an extremely important announcement because Antifa is more than just a terrorist group. It is, in fact, the paramilitary arm of the Democrat Party.

As is often the case, Trump made his consequential announcement via Twitter:

The United States of America will be designating ANTIFA as a Terrorist Organization.

378K people are talking about this

What Andrea Widberg describes as “the paramilitary arm of the Democratic Party” I would describe as the Direct Action Arm of the DERP state.

Note also that the violent protests and arson are happening in the deepest of deep blue urban areas, and are in no way nationwide nor universal.  Far from it.  Instead, what we can deduce from the patterns of these violent actions, is that they are being centrally supported/leveraged.

Trump to designate Antifa as a terrorist organization, wants FBI to pursue members

By John Solomon, Just the News

National Security Adviser Robert O’Brien told ABC News’ George Stephanopoulos that the rioting in most cities was being instigated by outsiders aligned with Antifa.

“The reports we’re receiving is that this is Antifa. They’re crossing state lines,” O’Brien said. “And we’ve seen this happen before. We saw it in Portland. We saw it in Seattle. We saw it in Berkeley. So, look, we’ll keep our eyes open for anyone else that wants to take advantage of the situation, whether it’s domestic or foreign.

“But right now I think the president and Attorney General want — [William] Barr wants to know what the FBI has been doing to surveil, to disrupt, to take down Antifa, to prosecute them,” he added. This isn’t the first time they’re out there and they’re using military-style tactics and traveling around the country to take advantage of these situations and burn down our cities. And that can’t be tolerated.”

Indeed it cannot and must not be tolerated nor allowed to prosper.  How many prominent Democrats will be implicated when the level of attention fixed on Trump and his Campaign/Transition/Administration (illegally and without legal justification) is fixed (legally and with full legal justification) on AntiFA as a domestic terrorist organization and their network of funders and supporters?

A further note on AntiFa:

Antifa claims to be Anti-Fascist, so people think it’s a good organization. It’s not.

When fascism appeared in the 1930s, its biggest enemy was communism. This was not because fascism and communism were antithetical ideologies. It was because they were sister totalitarian ideologies, both arising out of socialism, with both competing for the same voters. The Antifa of the 1920s and 1930s in Germany, therefore, wasn’t a peaceful democratic movement seeking to stand against all forms of totalitarian socialism; it was, instead, a violent communist group engaged in bloody internecine warfare with Hitler’s fascists.

Lest you have any doubt that today’s Antifa is the direct descendant of the violent communist group in Hitler’s Germany, just compare the logos. Here’s the original Antifa logo:

And here’s the American Antifa logo:

For those who say that Antifa is obviously communist, so it has nothing to do with the Democrat Party, think again. Over the past few years, Antifa has been operating freely in Democrat-run cities such as Berkeley and Portland, attacking anything or anybody they think is conservative. In those cities, the mayors have explicitly told their police forces to stand down. This means that the mayors are treating treat Antifa as a Democrat paramilitary organization [Leninist direct action arm] that uses violence to suspend citizens’ First Amendment rights to free speech.

Time to take a page from the SCOAMF’s words, but rather than punching back twice as hard, we must see this whole terrorist network rolled up, prosecuted, and incarcerated.  Such a roll up is what the tools of FISA were intended for. 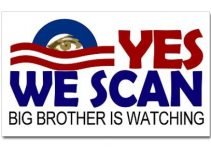