In case you doubt me,

Daily Beast Editor and MSNBC contributor Sam Stein marveled on Twitter at the response of local officials and the private sector, tweeting “I’m not the first person to make this observation but it truly is remarkable the degree to which local and state officials, as well as private entities and businesses, are making these massive public health policy decisions while the feds seem to be moving much more slowly.”

Another salient accidental light bulb appeared over the head of Daily Beast editor Molly Jong Fast, a fervent critic of President Donald Trump, when she tweeted “So the states are basically governing themselves because our president doesn’t know how to ‘president’ at all?”

No, Molly, you don’t properly understand how our system of Government is designed to work.  Not all states have huge urban populations.  Not all major urban areas have failed to adequately prepare.  Thus the situation is a whole range of situations for which there is no single solution.

Amid the caterwauling from progressives like Mayor Bill de Blasio or Senator Bernie Sanders for Trump to nationalize large portions of the American economy or supply chain, it’s the states who are exercising their power, and indirectly bringing an end to any discussion of putting the federal government in charge of our entire healthcare system.

And if ever there was a notion that needed to die, nationalizing health care is it.

The answer is almost never “we need more government.” 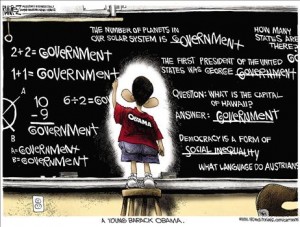 And we certainly don’t want to create any tools or precedents that the dhimmocrats can abuse as they have the FISA surveillance tools.