Home
Categories
A Few Headlines – best of the interwebs

I haven’t done one of these in a while, so away we go…

“The Department of Health and Human Services has decided to return the federal funds back to the state of Texas to be used at its discretion, even if it excludes abortion providers like Planned Parenthood.”

That’s because Obama hates women who don’t murder their own babies – and Trump doesn’t. It really is that simple.

Trump Will Speak at the March For Life

“He is the first sitting president to attend in the event’s 47-year history.”

Still & again, Life in prison for all abortionists on demand and without apology!

“Now that most Senate Republicans have made it clear they don’t support allowing new witnesses to be called because that should have been the House’s job, not the Senate’s, Democrats are predictably livid.  Right on cue Chuck Schumer said “That’s a cover-up, not a trial.” This petulance, which is Chuck’s major political attribute,  will last throughout the trial no matter how long it goes.

The die has been cast multiple times and the Rubicon has been crossed.

There were plenty of times the Democrats could have turned back. But, even staring down poll numbers that should have disabused them of any desire to go the way of impeachment, they marched on unabated, straight for a cliff.”

Flying monkeys stoned out of their gourd on TDS have no other choice.

What’s The Opposite Of Diversity?

“University: Profs donating to Democratic candidates outnumbered those giving to Republicans by 95 to 1 ratio”

Just like the global warming scammers, when these virtue signal crap weasels start acting like it’s a problem, then g#dd#mmit, I’ll start thinking it’s a problem.

“How do you know a small group of committed individuals can change the world?
Because it’s the only thing that ever has.

There is magic in a small hard corps.
Ask Easy Company of the 506th if that formula works.

But the Lone Ranger is a fictional character.

So meet and greet. Go shooting together. Teach a class or three. Go on a hike. Make friends over the back fence, at the local hall, in a bowling league, or over at the Legion Post or Elk’s Lodge. If there isn’t a local group, make one from scratch.
If needs be, with just two people. Or even just one.

If you could pull 22,000 into Richmond on a cold holiday, there’s no reason you can’t pull 200 from every 2A sanctuary county in VA, right now. And that’s just this week.

And once you get something  or anything going, go find the group the next county over, and keep in touch with them.
Lather, rinse, repeat for every contiguous county.

Boom.
You’re now really a Committee Of Correspondence.
Which really f**ked up an awful big slice of King George III’s tyrannical empire at one point.”

“After some time passed, Lockhart added a second tweet to his first tweet, writing, “Ok maybe I made up the convo, but you know that’s exactly what they’re thinking.”

This is CNN – lying liars who now purport to read mind.

CIA analyst Eric Ciaramella Was Overheard in ’17 Discussing With Ally How to Remove Trump
Ciaramella is the alleged anonymous “whistleblower” to Trump’s phone call with Ukraine’s president Zelensky. But considering that Trump released the transcript of that phone call, there was no whistle to be ‘blown.’

“Sources told RealClearInvestigations the staffer with whom Ciaramella was speaking was Sean Misko. Both were Obama administration holdovers working in the Trump White House on foreign policy and national security issues. And both expressed anger over Trump’s new “America First” foreign policy, a sea change from President Obama’s approach to international affairs.

“Just days after he was sworn in they were already talking about trying to get rid of him,” said a White House colleague who overheard their conversation.

“They weren’t just bent on subverting his agenda,” the former official added. “They were plotting to actually have him removed from office.”

That’s not the definition of a whistle blower. That’s a spy.

“Trump victimized Ukraine, we were told. Except the victim doesn’t feel that way. Ukraine’s president has said repeatedly that Trump did not mistreat him. The Democrats keep saying that you can’t have a trial without witnesses. But a better question is, How can you have a trial without a victim?

Trump gave aid to Ukraine, even aid for lethal means, something Obama never did. And even though he could have conditioned the aid on Ukraine tackling corruption, he didn’t.

The crime, the Democrats tell us, is a thought crime: he considered withholding the aid. On that comically slender reed, they have hung their case. On Tuesday, they said with straight faces that Trump’s mere thoughts violated the Constitution.”

Since when have the Dems cared about the Constitution?

“Schiff lied to the Senate about what Morrison testified about his own impressions of the call, playing a selectively-edited video in which Democrats’ counsel used his own words, not Morrison’s, to describe his impression of the call.”

“House Intelligence Chairman Adam Schiff appears to have mischaracterized a text message exchange between two players in the Ukraine saga, according to documents obtained by POLITICO — a possible error the GOP will likely criticize as another example of the Democrats’ rushed effort to impeach President Donald Trump.”

Occam’s razor says ‘mischaracterized’ for Schiff is always ‘LIED ABOUT.’ 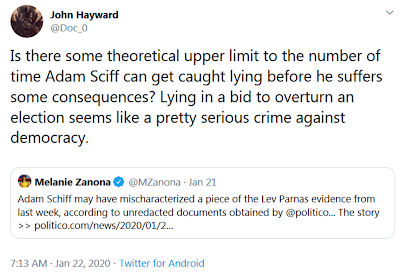 “The order came the same day an attorney for the mother of Hunter Biden’s child, Lunden Roberts, accused Hunter Biden of failing to abide by a court-mandated deadline to disclose a deluge of information, including a list of all companies he owns or controls, his sources of income and employers for the past five years, unredacted copies of his tax returns, copies of deeds to properties he owns and more.

Hunter Biden has even refused to provide the address in which he resides and his telephone number, Roberts’s attorney Clinton Lancaster said in his filing Monday.”

“Biden’s gated rental home, built by renowned modernist architects Conrad Buff and Donald Hensman, features floor-to-ceiling windows, a pool, a guest house, and panoramic city views. The fully updated abode was on the market for $3.8 million before it was taken off last summer, according to listings.”

Yet Hunter refuses to buy his baby milk and diapers. This guy is a true POS.

“When last we checked in with this wax-my-balls Canadian freak, he/“she” had assaulted a reporter outside a courthouse in Surrey, British Columbia. Now it seems the freak has spent time behind bars:”

“Bad guys are still getting shot. HPD: Convenience store manager shoots ‘erratic’ man who claimed he had a gun.”