Home
American exceptionalism
The Meme That Dare Not Be Mentioned

The news was once touted as the early edition of history.   Then they had a collective nervous breakdown.

It is the story of their lifetimes, and the journalists are blowing it — bigly.

A billionaire playboy comes down from his three-story penthouse apartment overlooking Manhattan to enter the presidential race. He is a world figure, best-selling author, TV star, and ladies man. He offers himself as a tonic to the national morass, and an alternative to selecting another President Bush or Clinton.

And that offramp from dynastic politics was much needed.

That is a fantastic story. America replaced an affirmative action hire with a competent businessman. While our real-life Batman may have been born a millionaire, he worked to expand his fortune 1,000-fold — just like the Bruce Wayne of fiction.

Have we learned our lesson about affirmative action as Presidential qualification?

How did the leading “conservative” periodical play it? “Witless Ape Rides Escalator” read the National Review headline. And media coverage after that was all downhill. The part of the country that still believes in the media is convinced that it is run by a bumbling Hitler who just got lucky on the economy and on avoiding World War 3 three or four times now.

The split between the elites and the population deepens and widens.  Who are you going to believe, what you see going on around you or what your “betters” tell you? 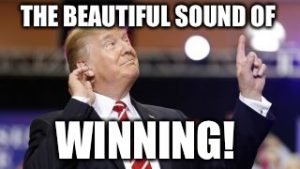 Hat Tip: Glenn “Instapundit” Reynolds, who encapsulates the situation for us:

A New Way To Lose At Jeopardy (and Open Thread)
FIS Court Aligns With DERP State
Tags:Trump as Bruce Wayne