This week’s Weekend Caption Contest™ celebrates the First Amendment. It’s to liberals what garlic is to vampires. The assignment this week was to caption the following picture:

2) (fustian24) – “Dear Lord, judging the terrorists is always for you to do. I’m just happy to help arrange the meeting…”

3) (RockThisTown) – “‘Lord, please give me the strength to fend off 90% negative attacks from the media, all the lies & smears from my political opposition and . .. oh wait, never mind, I have that. Please help someone else in need!’”

4) (rodney dill) – “The rendition of Don’t Fear The Reaper was going over weil, until Pence started with the cowbell.”

5) (yetanotherjohn) – “ know what you’re thinking. ‘Did he pray six times or only five’? Well to tell you the truth, in all this excitement, i kind of lost track myself. But being that he’s praying to the one true living God, the most powerful in the world, and would blow your soul clean off, you’ve got to ask yourself one question: ‘Do I feel lucky?’ Well do ya, punk?”

(Vagabond661) – “There was a moment of silence at the Prayer Breakfast for Ricky Gervais’s upcoming suicide.”

(Par4Course) – “Trump prays that he can continue to be as awesome as he has been for the last three years.”

(Rick Adams) – “Trump closes his eyes, feeling moved that these worthies would be praying for him, and his mind begins to drift: “Thank you Lord, for your many blessings, how splendid are the works of your hands and your creation, the blue sky with its fleecy clouds, the majesty and power of the sea, the marvel that is the human body… especially the female human… body… particularly the divine curves of… of… boobies.” And his thoughts inexorably circled the drain thereafter.”

(Mary Gehman) – “Are there no mirrors where she got dressed? 🙂”

FIS Court Aligns With DERP State
This Was Unexpected 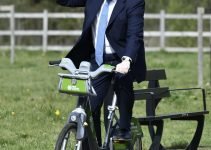