This week’s Weekend Caption Contest™ was…unusual. Yet another entry in the “Things I Never Thought I’d See 25 Years Ago” file. The assignment this week was to caption the following picture: 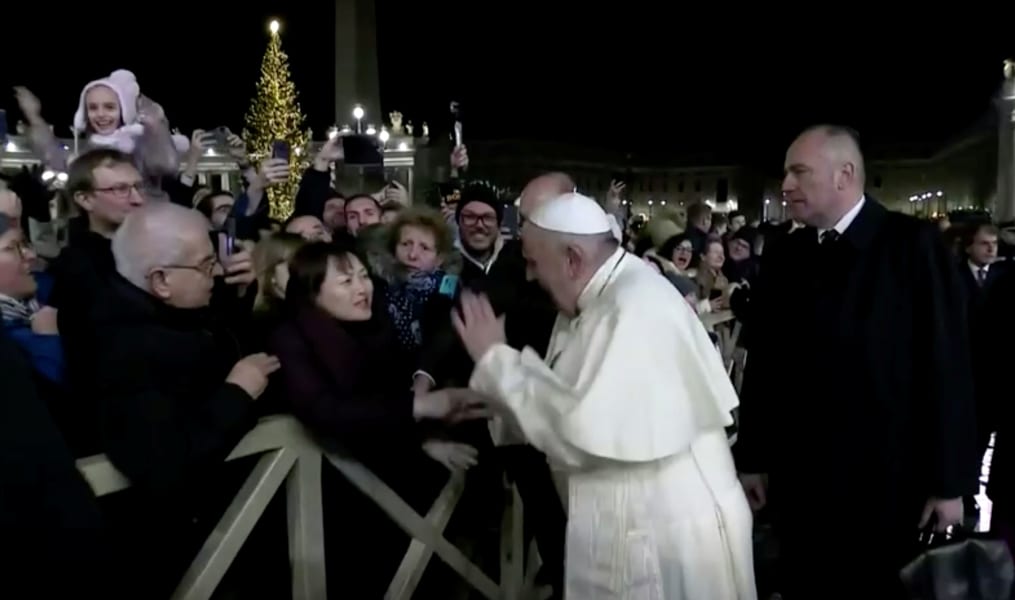 (Par4Course) – “Pope Francis stops to slap a woman on his way to give a speech condemning violence against women.”

(guido81_MA) – “Look, strange old men wearing dresses setting fires that give off a puff of white smoke is no basis for a system of religious hierarchy. Supreme Ecumenical Power must come from a mandate from The Supreme Being, not from some farcical collegiate cardinal campfire. If I was to claim to be the Vicar of Christ just because some cross dressing old men lit a fire, they’d put me away. OH, NOW WE SEE THE VIOLENCE INHERENT IN THE SYSTEM! COME AND SEE THE VIOLENCE INHERENT IN THE SYSTEM. HELP! HELP!, I’M BEING UNBLESSED!!!”

4) (BluesHarper) – “For a second there the Pope thought he was a Nun.”

(fustian24) – “The Pope just wanted to see if she’d turn the other cheek!”

(Brian Brandt) – “She asked the Pope to pray that Trump got re-elected. All she got was smacked.”

(Porkopolis) – “The Pope’s New Year’s resolution is to master the subtleties of ‘Rock-Paper-Scissors’.”

(RadiCalMan) – “It must be the skirt I’m wearing?”

(Paul Hooson) – “Things could be worse. An altar boy could fall out from under the robe…”

(yetanotherjohn) – “Pope: I thought it was Hillary grabbing me to get a miracle that she would become president. I mean, part the red sea, flood the earth, create everything from the spoken word are doable miracles, but Hillary becoming president, puhleese.”