I’d challenge the left to defend such positions as infanticide, gender as identity vice physiology, and racial quotas as a cure for racism, but the response is inevitably an accusation ending in “ism.”

RedState Quotes NYT, but Not Visa Versa – This Is More Important Than You Realize

If you have always suspected this, you may perform your victory dance now.

As Haidt describes in his book The Righteous Mind:

Haidt’s results flatly contradict the narrative usually presented to the public. Progressives are constantly berating conservatives for not understanding their deeply empathetic plans for the perfect society, immersed as we are in our bigotry, hate, and oil money.

I highly commend to you this TED talk by Jonathan Haidt, and offer you a conclusion based on it that he very carefully avoided.

He identifies five pillars of morality which are extant across all cultures.

It should surprise no one that pillars one and two are uniformly more developed (only slight differences between Right and left).  The remaining three are much less developed in the left, and much more robust on the Right. 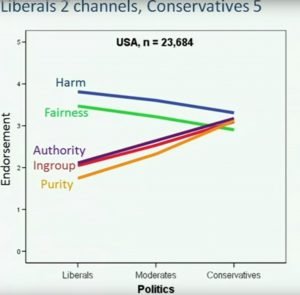