That’s the title The Other McCain gives to his assessment about hollyweird’s latest ‘get woke, go broke’ polished turd.

Most of us enjoyed the original 1984 Terminator directed by James Cameron. Your disbelief could be suspended as you watched an ordinary young woman (Hamilton) muddle through her ordinary young woman life, until thrust into literally other-wordly, death defying terror beyond anyone’s control. It was a truly creative horror film with deep sci-fi twist that left you spell bound to the chaotic conclusion.

By all accounts, the latest incarnation of the franchise, Terminator: Dark Fate, ain’t any where close to that film. TOM says,

“The plot of Terminator: Dark Fate seems to have been concocted by a committee of Gender Studies majors and DNC consultants. Director Tim Miller went out of his way to emphasize the “progressive” ideas symbolized by the character played by Mackenzie Davis:”

‘Progressive.’ Miller then insults critics of the spectacle as ‘closet misogynists.’

More importantly, I just can’t suspend my disbelief for a cast out of an AARP commercial performing Herculean warfare tactics for 120 minutes during this predictable sequel to sequel of a movie sequel. 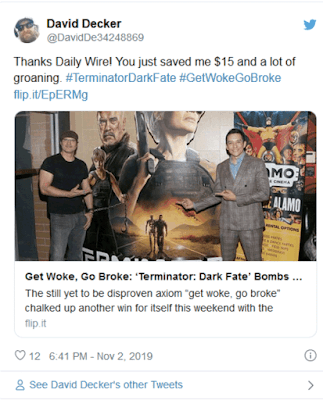