The first question that comes to mind is “Which wife?” Al-Baghdadi was known to have four wives, plus several ex-wives, one of whom was arrested in Lebanon in 2014, and freed a year later in a prisoner swap with al-Qaida.

The 2nd question is “What part did the ‘intelligence gold mine’ obtained from the capture of al-Baghdadi’s elder sister days earlier play in the wife capture?” 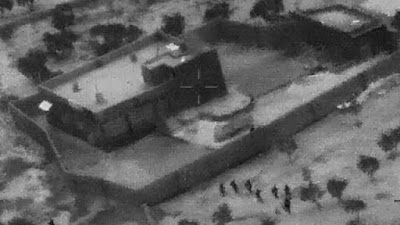 Suzan Fraser at the Associated Press connects some dots:

“The ISIS leader blew himself up during an Oct. 26 raid by U.S. special forces on his heavily fortified safe house in the Syrian province of Idlib.

…Awad was with her husband, daughter-in-law and five children when she was detained. A Turkish official said the 65-year-old sister is suspected of being affiliated with the extremist group and called her capture an intelligence “gold mine.” Authorities had posted a picture of the sister.

It was not Immediately clear if Awad’s capture led to intelligence that allowed for the detention of the wife.

One of al-Baghdadi’s wives is an Iraqi known by the name of Nour, the daughter of one of his aides, Abu Abdullah al-Zubaie. She was identified by name by al-Baghdadi’s brother-in-law in a recent interview with al-Arabiya TV. The brother-in-law, Mohamad Ali Sajit, who is in Iraqi custody, said al-Baghdadi had four wives when he last met him, sometime last summer.”

‘When he last met him.’ Apparently, interchangeable wife-ing is given some type of imprimatur under Islamic law. But given their fondness for child brides, I’m not surprised.

Fraser at AP dishes dirt on one Baghdadi ex, then spot the wrongheaded wording in her last sentence:

“Also, one of al-Baghdadi’s ex-wives was arrested in Lebanon in 2014, and was freed a year later in a prisoner swap with al-Qaida. The Iraqi ex-wife, Saja al-Dulaimi, had fled from al-Baghdadi in 2009 while pregnant with his daughter. At one point, al-Baghdadi was also believed to have married to a German teenager in 2015 but she was reported to have fled a year later.

The raid that killed al-Baghdadi was a major blow to his extremist group, which has lost territories it held in Syria and Iraq in a series of military defeats by the U.S-led coalition and Syrian and Iraqi allies.”

Al-Baghdadi’s aide, a Saudi, was killed hours after the raid, also in northwestern Syria, in a U.S. strike. The group named a successor to al-Baghdadi days later, but little is known about him or how the group’s structure has been affected by the successive blows.

Up and until his death, al-Baghdadi had moved from place to place in eastern Syria amid a tightening U.S.-led campaign against his group as IS-held territory fell bit by bit. He ended up in Idlib, in northwestern Syria, an area controlled by a rival, al-Qaida-linked militant group. It was not clear if any of his wives were with him at the time of the raid, during which two of his children were killed.”

‘Killed.’ How passive and ambiguous. No, the correct word is ‘murdered.’ When cornered by US Special Forces, Baghdadi detonated a suicide vest that killed himself and his children he forced down a rathole.

President Trump was never more correct: “(Baghdadi) died like a dog, he died like a coward. The world is now a much safer place. God bless America,” he said.