This week’s Weekend Caption Contest™ was another YUGE success. It was nice to have some humor as the left trots out another round of Faux-Outrage-Impeachment-Theater. The assignment this week was to caption the following picture: 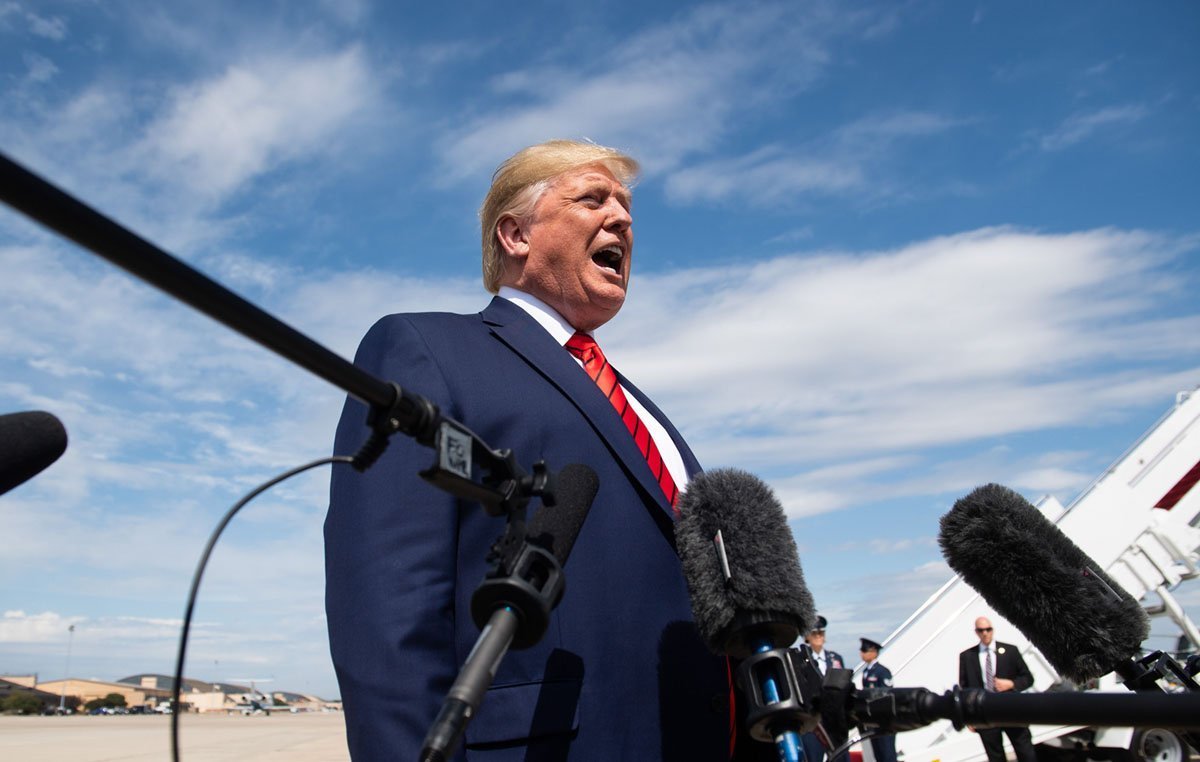 (cathymv) – “Michelle… is that your microphone…. or are you just happy to see me!!”

Trump: I wish to complain about this Hillary candidate what the DNC is proposing again in 2020.

DNC: Oh yes, the, uh, the Chapaqua Blue…What’s,uh…What’s wrong with her?

Trump: Look, matey, I know a dead campaign when I see one, and I’m looking at one right now.

Trump: The cankles don’t enter into it. She’s stone dead.

Trump: All right then, if she’s restin’, I’ll wake her up! (shouting at the cage) ‘Ello, Mrs Clinton!
I’ve got a lovely fresh donation for your Foundation for you if you show..

DNC: There, she moved!

Trump: No, she didn’t, that was you hitting the candidate!

Trump: Yes, you did!

DNC: I never, never did anything…

(Takes Hillary off of the stage and thumps her head on the podium.)

Trump: Now that’s what I call a dead candidate.

DNC: Yeah! You stunned her, just as she was wakin’ up! Chapaqua Blues stun easily, major.

Trump: Um…now look…now look, mate, I’ve definitely ‘ad enough of this. That campaign is definitely deceased, and when I ran against her not ‘alf an hour ago, you assured me that her total lack of movement was due to her bein’ tired and shagged out following a prolonged campaign.

Trump: PININ’ for the SWAMPS?!?!?!? What kind of talk is that?, look, why did she fall flat on her back the moment I got here?

DNC: Well, we’d better replace her, then. (he takes a quick peek behind the counter) Sorry squire, I’ve had a look ’round the back of the shop, and uh, we’re right out of Clintons.

Owner: (pause) I got a fake Indian.

Trump: All right then.”

“Avenatti lied about me, now he’s facing a judge.

“Someone keep Sleepy Joe away from sharp objects, k?””

(Retired military) – “I don’t know what is going on here but I know that the press will call it racist, sexist, homophobic, antiislamic, and will demand impeachment because of it.”

4) (EricSteel) – “Even before first sound left his lips the Democrats announced another reason to impeach him.”

(guido81_MA) – “You think I’m bigly now, impeach me and I’ll become very very more bigly than you can ever imagine.”

6) (RadiCalMan) – “If Muhammad Ali ever taught me anything, it was how to “Rope them Dopes”!”

(RockThisTown) – ““Ask not what your country can do for you, ask how Biden’s kids enrich themselves by having influential parents.””

(Wild_Willie) – ““Clowns to the left of me, jokers to the right but here I am, stuck in the middle with you.””

(Paul Hooson) – ““Quick, someone set a trashcan on fire in the back to distract everyone!!!”.”

(Mike) – “Am I worried about impeachment? Jock itch is higher up on my list of problems!”

(yetanotherjohn) – “Behind every successful man, their is a woman … in this case Hillary, who is still trying to figure out what happened and why she is not president.”

(rodney dill) – “…speaking of which… Pelosi, How’s your father?”