This week’s Weekend Caption Contest™ was unusual in that one of the people featured in the photo contributed significantly to the actual captions. We also saw the rare dust-off of the “Most Appropriate” category, given that almost every caption fit the inappropriate bill. The assignment this week was to caption the following picture: 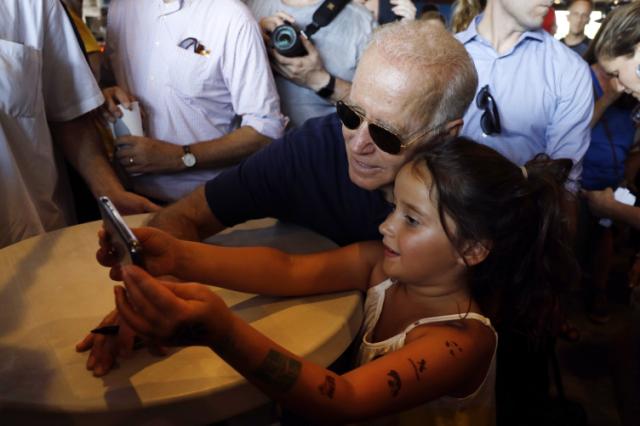 1) (EricSteel) – “I want to send this to my friend Jeffrey Epstein.”

(BluesHarper) – “Someone had to take up the slack since Michael Jackson died.”

Biden “You should have seen how suprised he was””

3) (Brian Brandt) – “I don’t understand these new-fangled phone thingies. Can you show me how to transfer $500 to an inmate’s commissary account?”

4) (rodney dill) – ““These things are great… everyone should own one of these…. The phone is pretty cool too.””

5) (yetanotherjohn) – “Joe knows there are three genders. Male, Female and young enough to get him in trouble.”

(RockThisTown) – ““Can you call Ukraine on that thing? I need to talk to my son.””

Most Appropriate But Funny:

(Porkopolis) – “Biden: Yeah…but I still don’t understand why the birds are angry?”

(RadiCalMan) – “Do you mind if I plagiarize this?”

(cathymv) – “Little girl: This is a picture of Hillary Clinton – you remember her! Like you, shes never going to be President.”

(fustian24) – “Uncharacteristically, Mr. Biden was totally appropriate with the little girl, was engaging, and didn’t even make a single gaffe the whole time he was there.

Once again democrat handlers congratulated themselves on the wisdom of replacing the actual Biden with a convincing actor for most campaign stops!”