This week’s Weekend Caption Contest™ managed to combine two portents of disaster: the Ides of March and Beto. We really have a superb array of captions. The assignment this week was to caption the following picture: 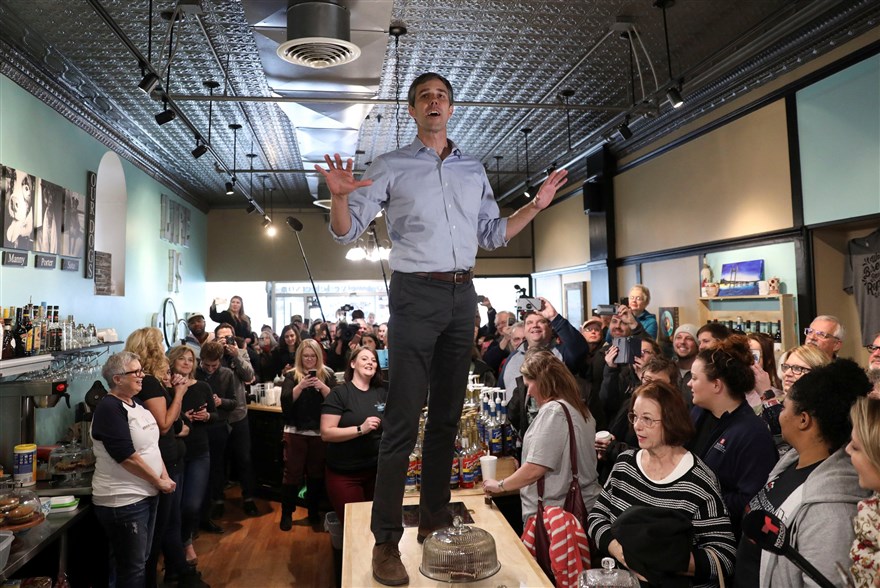 (EricSteel) – “Who ordered the Vapid Democrat on rye?”

(Kenny Moore) – “My wife couldn’t be here today, so I’ll need one of you gals to gaze at me in silence.”

Isn’t he dreamy? Beto is running for President against angry orange man. I have already started my Beto for President club here at work. We are all so excited. I am working to get an interview with this smooth talking latino Kennedy-esque adonis. I swear, I get tingles up my leg every time I see him. And when I imagine him shaking my hand, the song, He touched me, put his hand in mine and then he touched me comes to mind! Note to self, don’t sing that out loud to him! And then when he talks about free things for everyone, I swear, I feel like I’m going to swoon! I have his picture above my bed so that I can dream about him as I fall asleep.

I am just so excited, I could squee!!!

(yetanotherjohn) – “Throw out your hands!!
Stick out your tush!!
Hands on your hips
Give them a push!!
You’ll be surprised
You’re doing the French Mistake!!
VOILA!!”

(guido81_MA) – “An Irish guy pretending to be Hispanic announces his New Green Taco deal for the St. Patrick’s Day weekend.”

(Par4Course) – “Unable to stand on his accomplishments, Beto stands on a table.”

But all the Democrats are posers and losers.

I have a skateboard!””

(Joe_Miller) – “It’s a table of things equally qualified to be President.”

(Brian Brandt) – “About to join Wendell Wilkie, George McGovern, and Hillary in the ranks of the great un-electable.”

(Retired military) – “I didnt include Paul RYan or Mitch McConnell as I consider them 0/1024th Republicans. McConnell has done a decent job with judges but not much else. Ryan was worse than Ballless Boehner.”