Home
Feminism
About that glass ceiling

Take a look at this tweet from NBC News: 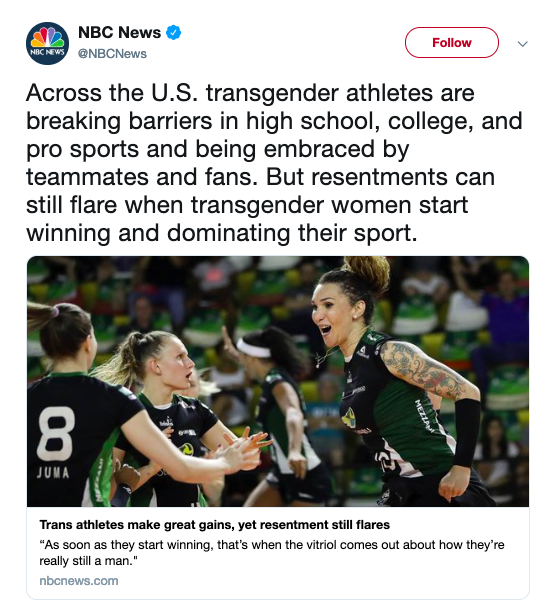 Men competing against women and winning is now “breaking barriers.”

It’s insane, isn’t it? As a woman, I can imagine how utterly demoralizing it would feel, after training for years in a sport, dedicating my life to it, investing blood, sweat, time, and effort to reaching the pinnacle of success, only to be defeated by a biological male who is then hailed by sports media as achieving something historically significant. How can feminists possibly support this when it makes women look superfluous. We’re going backwards, to a time when only men were allowed to live public lives, when men even acted out the women’s parts in Shakespeare’s plays. I thought feminists wanted women to do more, not less.

Additionally, look at the tone of the language of the tweet, which comes from the Associated Press article. Female athletes who object to competing against men are accused of being “resentful,” and implies that it’s all just sour grapes and that if they had just trained harder, they could have won.

This entire trans-thing is based upon the fantasy that the men and women are identical physically, mentally, and emotionally and, therefore, interchangeable. This concept has no basis in fact or science. Men and women are biologically different. Men have vast advantages in strength, speed, endurance, and oxygen intake. Just because a man dresses as a woman, wears his hair like a woman, and increases his estrogen to look and sound more like a woman, does not make him a woman. It’s just not possible.

All this is taking place in sports where female athletes, both amateur and professional, are expected undermine their own existence as athletes by going along with this false pretense. I want to know what will happen when trans folk start entering other fields, such as business and law. For decades, women have talked about breaking that glass ceiling, becoming the top executives in large corporations, partners in large firms. Still to this day, feminists say there are not enough women in executive positions. How will feminists feel if trans-women (biological men dressed as women) start surpassing biological women for promotions? Would feminists herald that a women breaking the glass ceiling?

Melissa Mackenzie tweeted this earlier today and I, as you can tell, am as gobsmacked as she is:

It’s not just aggressive, manipulative and abusive, it’s devolutionary when it comes to women’s advancement, which is what I thought feminism was supposed to be all about.