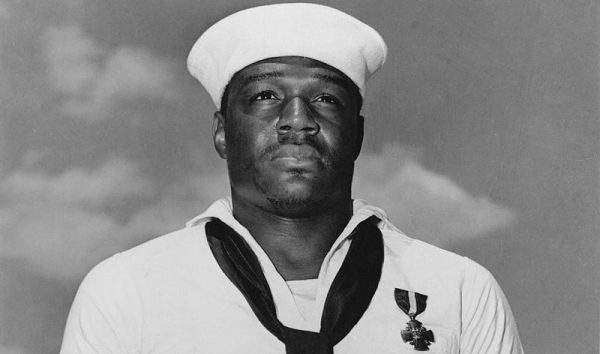 Doris Miller “was a Navy messman on the battleship USS West Virginia, who showed incredible courage under fire during the attack [on Pearl Harbor]. He was the first African American to be awarded the Navy Cross, the third highest honor awarded by the U.S. Navy at the time.” – Rick Spilman, The Old Salt Blog

Regarding Miller’s actions during the Japanese attack on Pearl Harbor, the U.S. Naval History and Heritage Command reports the following:

Miller had arisen at 6 a.m., and was collecting laundry when the alarm for general quarters sounded. He headed for his battle station, the antiaircraft battery magazine amidship, only to discover that torpedo damage had wrecked it, so he went on deck. Because of his physical prowess, he was assigned to carry wounded fellow Sailors to places of greater safety. Then an officer ordered him to the bridge to aid the mortally wounded Captain of the ship. He subsequently manned a 50 caliber Browning anti-aircraft machine gun until he ran out of ammunition and was ordered to abandon ship. . . Miller was commended by the Secretary of the Navy Frank Knox on 1 April 1942, and on 27 May 1942 he received the Navy Cross, which Fleet Admiral (then Admiral) Chester W. Nimitz, the Commander in Chief, Pacific Fleet personally presented to Miller on board aircraft carrier USS Enterprise (CV-6) for his extraordinary courage in battle.

Miller died on 24 November 1943 when his ship the USS Liscome Bay (CVE-56) was sunk by a torpedo from a Japanese submarine.

In 2010, “the U.S. Postal Service included Miller in its Distinguished Sailors collectible stamp series, which commemorates four Navy icons. . . The three other sailors are Adm. William S. Sims, commander of naval forces in European waters during World War I; Adm. Arleigh A. Burke, one of the top destroyer squadron commanders of World War II and three-term Chief of Naval Operations; and John McCloy, a two-time Medal of Honor recipient.” 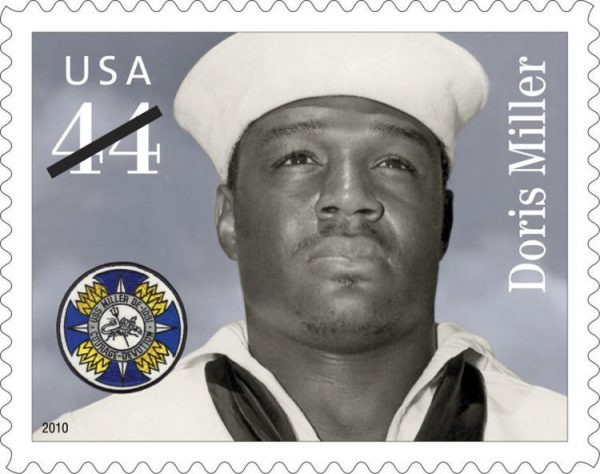 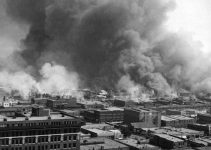