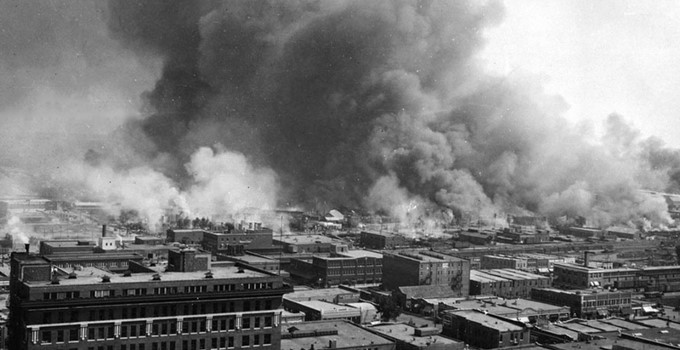 The 1921 Tulsa Race Riot (a.k.a. Massacre) was an event of great magnitude for black Americans, and yet the event isn’t well known by the American public.

From the Tulsa World: “The Tulsa race massacre of May 31-June 1, 1921, resulted in dozens of confirmed deaths and left hundreds injured and thousands homeless in the predominantly black Greenwood District. The violence caused massive devastation within the 14-hour period the event lasted.”

From the Washington Times: “Fires were lit and reportedly incendiary devices dropped from airplanes onto Greenwood rooftops. By the time violence subsided on June 1, 1921, some 35 city blocks were smoking ruins. Hospitals were overflowing with an estimated 800 injured and Red Cross estimates, later supported by an Oklahoma commission that looked at the riots in 2001, said at least 300 died, most of them black.”

From Hannibal B. Johnson, attorney, author and college professor:

Greenwood Avenue, the nerve center of the Greenwood District, flourished, drawing favorable comparisons to such celebrated thoroughfares as Beale Street in Memphis and State Street in Chicago. Over time, fear and jealousy swelled within the white community. African American success, including home, business, and land ownership, precipitated increasing consternation and friction. . .

Authorities arrested Rowland and held him in a jail cell atop the courthouse. A burgeoning white mob threatened to lynch him. African American men vowed to protect Rowland. They marched to the courthouse on two separate occasions.

More from the Tulsa World:

What struck [Hannibal] Johnson about the race massacre upon first diving into it were not all the varying details of the occurrence, but that few were aware it even happened at all. “I think that’s what strikes most people,” said Johnson, “an event of this magnitude, and importance in the context of American history, is not known. It’s not known locally. It’s only relatively recently that people in this community really know about the history. If you talked about this 30 years ago, most people would be oblivious to this history.”

By the way, a 04 February 2019 cartoon by Politico cartoonist Matt Wuerker illustrates the burying of racial incidents such as the 1921 Tulsa Race Riot.