2) (cathymv) – “Antifa and other assorted leftists calling for a new protest against ice…..”

(Retired military) – “Rachel Maddow “Good evening ladies and gentlemen. Tonight Alexandria Ocasio Cortez has asked to come on and lay the smack down on global warming deniers. Good evening Ms Cortez”
AOC “Thanks for having me Rachael”
Maddow “So look at this picture of Chicago. What do you say to the global warming deniers that say the sun is sole cause for the climate changes”
AOC “I use simple facts Rachael. Everyone will agree, I am sure that the sun will only put out so much heat during the year and we cant do anything to increase or decrease that amount”
Maddow “Of course. That is admitted by everyone.”
AOC “Well since we know that is true then it only stands to reason that if we use up all the heat during the summer than there is no heat left during the winter to keep us warm”
Maddow “Amazing. I cant believe I hadn’t thought of that”
AOC “Simple logic Rachael, simple logic””

4) (Scorpion) – “No house fires were reported overnight, however the police did find an ignited pair of pants smoldering near a dumpster on E. North Water Street.”

(jim_m) – “GOP takes control of every elected office in Chicago as Hell freezes over.”

(Blues Harper) – “What did you expect when you can abort a baby seconds before birth?”

(RockThisTown) – ““So much ice . . . it’s a stark reminder of the Kavanaugh ice-throwing incident & yet, there he is, on the Supreme Court, steadfastly refusing to resign. In other news, sources tell us that many people are coming forward to describe the wonderful humanitarian work Gov. Northam has done as a doctor & that they want him to complete his term as Governor. This is CNN. Back to you, Jim.”” 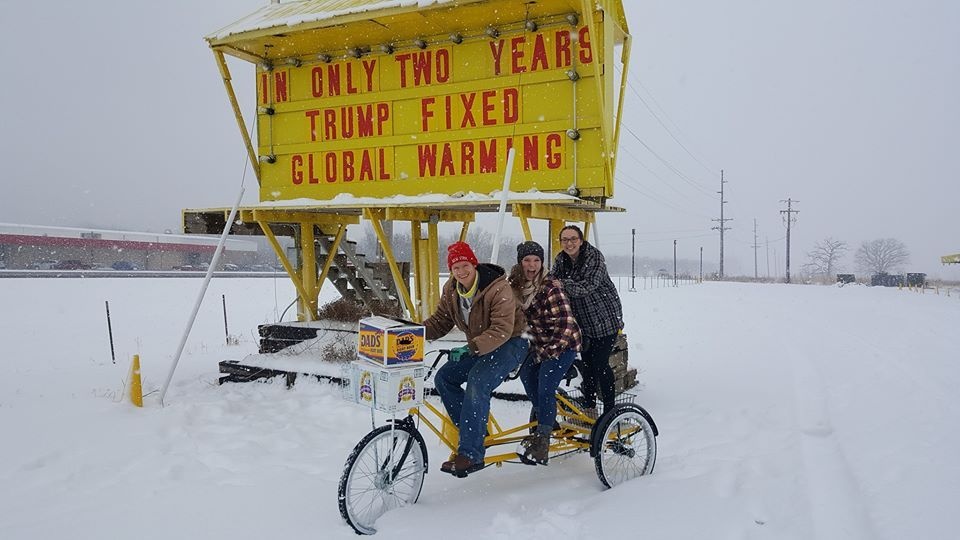 What are you looking at out there?””

“The planets fever has broke, thanks to My enduring diligence!””

(yetanotherjohn) – “I haven’t seen this many phallic objects hanging low, cold, and shriveled since the Hillary-RBG lesbian stripper act.”

(Paul Hooson) – “Cold as a witches’ tit, which seems remarkable as Hillary is not even president…”

(TheyTukRJobz) – “Or nooses. I thought bleach and nooses were standard issue equipment for all of us Trump-supporting racists. Oh, and no floral scent bleach, thank you.”